The Slave Trade in Africa: Follow-up 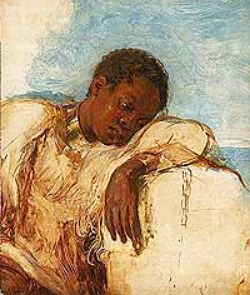 I will begin this post with a famous quote from the late Professor Chinua Achebe of Nigeria. According to the late professor, "Until the lions have their own historians, the history of the hunt will always glorify the hunter ”.

History has not been fair to Africa at all and the reason is because, in the case of Africa, the “hunter” is the one recording the tales of the hunt. Even in the few cases where the lions have been able to produce a historian, the hunter decides how the tales of the hunt must be recorded. So it makes sense to say history has been one-sided in most parts in favor of the hunter. The ancient documents which could help re-write history are no-where to be found and those who have taken it upon themselves to record history again, have turned history into a "scientific" experiment brainwashing the masses with new found ideas.

I received several emails concerning an article I wrote some time ago about the transatlantic slave trade that took place in Africa centuries ago. I know some people may be having similar questions and that is why I am making this follow-up post. I will try to answer some of the questions I received.

In the Patrilineal communities in Africa, a crowned prince destined to take over after his father, lived his entire life in his community and learned from his people especially his father until the day he took over. The same was for a nephew who was destined to take over from his uncle in the matrilineal communities. The importance of this was to keep history, culture and traditions intact for the next generation. When a king knows the history of the people he is governing, he is in a very good position to correct them when they go against the norms. Not just future leaders. It was the duty of every parent to pass down the culture, traditions and history of the land to his or her offspring. That was how history was orally passed down from generation to generation in most communities in Africa.

In today’s Africa however, it is not like that. Because most monarchies are very rich financially, they send their offspring abroad for “better” education. Some even live their entire lives abroad until it is their turn to come take over the thrown of their fathers. Even the current paramount king of the Ashantis, Otumfuo Nana Osei Tutu II, who is one of the greatest kings in Africa today, schooled abroad (University of Professional Studies, Kilburn Polytechnic, University of North London). Someone may ask, are there no universities in Africa? The answer is yes. There are so many great universities and colleges in Africa today and some of our leaders do school here. But once again, the question remains, where do those universities and colleges get their books from? It may surprise you to know that, even some of our so-called professors of African history living in Africa today, know almost nothing about Africa besides the little they learn from the "donated" western history books they usually receive.

If you want to know the true story of Africa then the best place to start is the rural areas and small communities in Africa where there’s been very little to no outside influence at all. There, the stories continue to be passed down orally just like in the olden days. Sadly however, most of their stories are considered nothing but "myths" and the reason is because they often contradict the western versions of history. I am very sure most of you have come across the famous African proverb that goes, "When an old man dies, a library burns to the ground." Now that is the meaning of this proverb. We learn the truth from the elders in our communities especially our grandparents in the villages and small towns across the continent and not necessarily from our Kings, Queens, and other traditional rulers.

I am not saying no African played a role in the transatlantic slave trade. There are criminals in every society but can we condemn an entire society (in this case an entire continent) based on the actions of some selected few? Can we condemn all Muslims because of the few extremists? As I said in my earlier post, some criminals (most of them previously condemned to death in their various societies) did play major roles in the slave trade, some as a form of revenge, the same way some Jewish people helped Adolf Hitler butcher their fellow Jews. Some Jews were even at more prominent positions where they could have helped but refused to use their positions to help save the lives of their fellow Jews. Some Jewish leaders also betrayed their fellow Jewish brothers and sisters for personal gains and some even participated in the killings. Yet, how often do we hear that Jews killed their fellow Jews during the holocaust? We only hear “Adolf Hitler murdered 6 million Jews”.

Simply saying “Africans sold their own brothers and sisters into slavery” without including the "demonic" manipulations and hardship Africans endured in the hands of those “white strangers” who visited our land, is history completely turned upside down.

#1 Sugu Lugu
I've always had the believe that, we as Africans did not sell our brothers and sisters into slavery. It is all misinformation and the agenda to rewrite history just to keep us down and divided. But it is for us now to make concrete corrections about ourselves and history.
Quote
Refresh comments list
Add comment