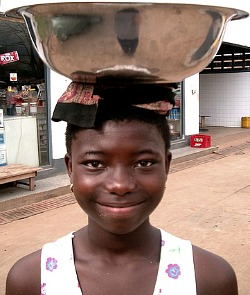 Africa is a continent of over 1.2 billion people yet Africa has very little to no say at all when it comes to trade agreements and world marketing issues. Africa is the "engine" of the world yet Africa has no say at all on some of the toughest issues facing the world today. Without Africa, the world would go "bankrupt" yet Africa continues to wallow in poverty. Although there's been some great improvements in the last decade or so, there is no doubt Africa still has a very long way to go.

Our colonial masters drew meaningless lines separating us and left us separated forever but as we all know, our separation only benefits our colonial masters and keeps us in bondage to the point where we find it so difficult even trading with our own brothers and sisters in Africa. We find it so difficult and almost impossible trading with countries within Africa. Meanwhile, we consider outsiders "friends".

We trade with Europe and we trade with America but the sad thing is that, we find it very difficult trading with our own African brothers and sisters. Why? Because our colonial masters drew several lines dividing us calling some Kenyans, some Ghanaians, some Nigerians, etc. making us feel we are different people. Our colonial masters made us feel we are so incapable of finding solutions to our own problems to the point where we need to look up to Europe, America and somewhere else for solutions to problems we face here in Africa.

Trade is actually an engine of growth and development but the sad thing is that, our beloved continent is yet to learn how to trade. Africa is a continent of great business opportunities and hope. Why? Because every young person in Africa is eager to work. Africa is a continent of great business opportunities. Why? Because Africa is the richest continent in terms of natural and human resources. However, despite the enormous opportunities to do business in Africa, every year Africa loses huge sums of money to "meaningless" high trade costs. Why? Because Africa is yet to reach her business potentials especially when it comes to intra-Africa trade and markets -- a major problem we can easily remove just by liberalizing trade within Africa. Just around 10% of Africa's trade occurs within Africa compared to over 60% in Europe and other parts of the world. Trade with Europe benefits Europe the more. The same thing applies to trade with America. However, trade within Africa would benefit Africa as a whole. This would also give Africa a major say at the international markets. In other words, if the intra-Africa trade improves from the around 10% to say 50%, Africa would need not force cheap goods and services on Europe or America and would have a major say when it comes to determining the market prices of our oil and other raw materials.

Someone may ask, why can't African countries trade peacefully with other African countries? There are several hidden answers to this question. If you read one interesting article here on Africaw.com about how the World Bank, the IMF and co. destroy Africa, you might get to know one or two of several such reasons. Once the intra-Africa market trade goes up, Africa's inter-continental trade goes down and because of that, several factors are working very hard to keep the intra-Africa trade levels at all-time low.

Also, imagine a situation whereby Ivory Coast imports those chocolate-making machines and start producing the chocolate bars right in Ivory Coast and then exporting them overseas for more profit. That would at least provide more job opportunities for the youth. In other words, the internal benefits go up. Because the outsider benefits go down, external factors work very hard together to help keep Africa's internal trade at all-times low. That is another major reason why African countries find it difficult trading with other African countries compared to trading with western countries such as those in Europe in America.

Although the late Muammar Gaddafi made some very wrong choices, this is one thing I loved about Gaddafi. Before he died, Gaddafi was working very hard to introduce a "common" gold currency which all African countries could use. This would help speed up the intra-Africa trade and also give Africa a major say at the international market. However, some western powers including America saw this as a major threat and that explains why they quickly got involved to help eliminate Gaddafi.

Although the question seems so complex, the solution is very simple. African countries should come together and work together to help liberalize trade in Africa. This would allow easy flow of goods and services across the continent and greatly benefit Africa as a whole.

RELATED: Free Trade Area and One Passport for Africa