How the World Bank and the IMF destroy Africa 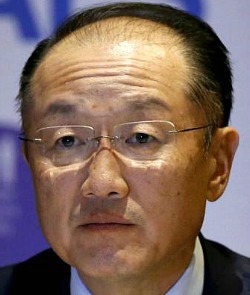 That was the beginning of much of the problems we face today in Africa. Now we are in a vicious cycle of poverty and there seems to be no way out. The western corporations flourish while the poor continue to die in poverty. In other words, the poor in Africa continue to feed the greedy rich corporations in the western world. The poor get poorer while the rich get richer.

People continue to die from extreme poverty and hunger in Africa and other parts of the world but not so many people know the World Bank, the IMF and the WTO are behind almost all these. It is a new form of war whereby the rich western corporations employ the poverty of the poor and the ignorance of the innocent as top weapons of mass destruction. In other words, the World Bank, the IMF (the International Monetary Fund), and the WTO (the World Trade Organization) are the triple enemies of progress in almost every developing country in the world today. Now let's see how the World Bank, IMF and WTO operate in Sub-Saharan Africa.

Now Ghana imports most of its rice from abroad at huge prices every year. So at the end of the day, Ghana owes the World Bank and the IMF huge amounts of money. However, the money did not remain in the Ghanaian economy because Ghana had to use the loan to import food from abroad. Meanwhile, the rice producing communities in Ghana could have helped produce enough rice to feed the nation (and even export some abroad to make more profit). Now the northern communities in Ghana remain the poorest in the country with no better jobs and no opportunities at all in most parts. Young boys and girls some as young as 9 are migrating to the southern parts of the country to major cities and towns such as Kumasi and Accra (a very dangerous journey for kids) all in search for jobs so they can take care of their poor dying families back home. Most of these kids (locally known as "kayayo") never return home. Some die along the way and some return worse than before and all thanks to the IMF and the World Bank.

Any leader who doesn't obey the World Bank, the IMF, the WTO, etc. is considered a "terrorist" and must be assassinated in most cases. For example, when there is an oil discovery in a developing country (that owes the World Bank) and the leader of that developing country is not ready to co-operate (so western corporations can easily take over the oil exploration), the World Bank and co quickly get rid of such a leader sometimes through war (just like what happened in Iraq). The World Bank elects their own "obedient" leaders to rule those poor countries so that they (the World Bank, IMF and co) can easily control that country's economy and market.

#13 BAAITSE PHUPHUWE#BW 2019-12-06 09:08
Yes; I think as Africans we need to rewrite our history and our economic potentials. Africa will only change if and only if sons and daughters of Africa engage in a constructive manner and establish their interest and cross fertilize their ideas towards building a better Africa.
Quote

#12 Reggie Welles 2019-08-12 06:06
No - Corrupt African governments and their continuous theft of state funds are the problem. Together with the ignorant citizens whose votes keep them into power. It’s time to stop blaming the west for Africa’s perpetual failures.
Quote

#11 African lives matter 2019-06-30 13:27
Our leaders are traitors . They work only for their own interest and the interest of western countries. I believe we are selling our products for a price which is next to nothing and mostly we are treating our resources and manpower like a giveaway newspaper and goods.Many of our fellow citizens are leading undignified lives in western countries. It is a modern-day form of Slavery. Slavery in the guise of hospitality. Africans are still subjected to exploitation, incarceration, and other forms of abuses. They are criminalizing us to justify this modern day slavery. Prisons with pregnant women and children are now referred to as family refugee centers. You may have heard about western countries who claim to take in millions of migrants. The world is turned left and right by capitalist money and power mongers at the expense of low class society.Migration and religion have become major money-making grounds. All western countries are turning blind eyes. If you heard that countries like Germany help refugees, that is a complete lie.
Quote

#10 Iorsue Paul Aondona 2019-01-18 03:52
Apart from the unwholesome relationship between the Western-European countries and Africa, we have also witnessed invasions by these countries under the guise of "Loans and humanitarian Assistance". In the event, they control our resources and since, our leaders are gullible, we are suffering today. Corruption and poor leadership is the flip side to the unfortunate development. African leaders cherish and incubate corruption which has continued to affect the continent.In the end, I blame African leaders for failing to position Africa and its peoples for better livelihood and human development. A situation where most African countries are dumping grounds for imports, what do we expect?
Quote

#9 Gasston 2019-01-15 11:37
The economic problems of the world are simple. Everyone wants to have more and the politicians are promising everything to the people to get into positions, so that they can fill their pockets. Most of them have zero technical or management experience.. They know nothing about health management or security. Only one part of their body works, their mouths. Take Australia for example. It has enormous mineral as well as agricultural resources. Their manufacturing is falling apart. Their politicians are taking the easy way out. They sell everything to the Chinese for peanuts, instead of building up a large industry making quality products for ten times the price of the raw materials. . Then the Chinese produce poor quality products out of it, wasting good raw materials. So the people have a comfortable time. How long? Eventually everything runs out and the fat, lazy, over vaccinated, sick people with few skills and a closed mind, will, as Crocodile Dundee said "curl up their toes and die" This applies to many other people and countries in all parts of the world.
Quote

#8 Walungama Juma 2018-12-13 03:30
I propose that we start to write our own history and economics books. Most of western and European published books are highly biased. Africa has to unite and we need our own currency! Possibly we need to cancel all unnecessary agreements that were signed in favor of the non-African.
Quote

#7 Shivakumar Selvaraj 2018-10-07 10:57
I was in Egypt and a local guide explained to me how the World Bank destroyed Egypt's economy. They signed an agreement with an Egyptian military official for a massive loan. But with that loan came the condition that the world bank could control Egypt's currency. And as soon as the agreement was made they proceeded to devalue the currency and send Egypt sliding downhill fast towards poverty.
Quote

#6 Alpha Traveller 2018-10-03 09:57
The only way to stop IMF and World Bank from controlling African resources is if the African leaders stood up and form one Africa where they depend on themselves because I believe Africa is rich enough to support itself, solve its problems, use its resources to eradicate poverty and improve health facilities, and this will create better future for Africans and improve livelihoods.
Quote

#5 K. Ananse 2018-10-02 23:13
These are the same organizations that sponsor terrorist groups in Africa and other parts of the world. Terrorist groups create that pathway for these so-called world bodies to come in as "peacekeepers". They come in, kill millions of innocent people through their "peace-keeping" activities, and take over the poor country's economy and market. How could they keep peace by dropping bombs on innocent people? Also, nobody was born a terrorist. Most terrorists are desperate people pushed to the limit by the activities of some these evil world governing bodies.
Quote

#4 Gian Paolo Pucciarelli 2018-09-30 09:23
That's simply part one of NWO's plan. It was created at Bretton Woods 1944, in order to push African countries into debt, through "humanitarian help" loans, then by looting their natural resources, thanks to the dictators the Wall Street's money power elite has set to their leading governments, perfectly in line to her creed "Make world society work for the few". Instead of promoting right investments in African countries to improve their economies, they force African mass migrations to Europe for the simple reason that, a future melting pot European population will be easily under their political control.
Quote

#3 Onya Adeoye 2018-09-27 00:24
Yes the West is partially to blame for Africa's current situation, but it is also the fault of Africans themselves for slaughtering each other, and electing corrupt politicians who's sole ambitions are to line their own pockets with cash at the expense of the rest of their people. I understand the West is directly responsible for a lot of that as well, but at a certain point, the people have to say enough is enough.Times are changing though, and I see a very bright future ahead for Africa. I just hope that moving forward, African leaders will wise up and learn from past mistakes. It's time for Africans to look out for themselves and not rely on the West because the West will always be looking for their own interests first.
Quote

#2 Pc Wil B 2018-09-25 10:12
I do believe that these insidious organizations were put in place to simultaneously and precisely disenfranchise and degrade the continent as a whole only for the generational gain and greed of its predecessors. We've been in this unforeseen predicament for far too long now. The vast Majority of the leadership are simply pawns of the oppressors and aren't to be trusted.The only way for Africa to rise again is for Africans to resist the temptations of the oppressors, including public officials! Refuse their aid and return to their original state of independence. Unfortunately, through the struggles, blood may be shed, but it's for the greater good of the the future of Africans on the continent and abroad.
Quote

#1 kirandeep 2018-09-16 23:11
IMF and world bank work are to resolve monetary problems all over the world wide and facilitate worldwide trade by promoting stability and keep maintaining and control the exchange depreciation.World bank offering the loans to developing nations since they are source of the interest payment which is very profitable to world bank, like, Philippines was paying the 44% interest in 1980. These are like a exploitation which they force poor countries to do these. In another words, their offered money affecting the farmers or primary sector of the country.
Quote
Refresh comments list
Add comment