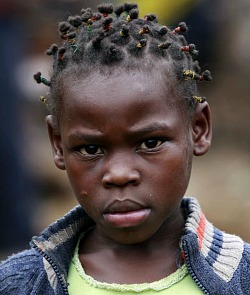 This is the story of Kenya's coastal children and this is everyday life in Kenya. The tourism industry continues to boom and Kenyan politicians couldn't be happier. According to the Kenyan leaders, tourism is booming and it is all "good" news. This is what the world often gets to know while the reality hides under the dark shadows of the wicked one.

Because of the extreme poverty levels within Kenya's coastal communities, poor young boys and girls of school-going age are often out of school and are easily lured into the booming commercial sex tourism whereby pedophiles from all around the world come to lure these poor young childen with money and gifts and sexually molest them.

"A survey we conducted shows that boys engaging in sexual activities with male tourists are buying pampers because they can no longer hold their stool" -- Joshua Nkanatha, the Malindi sub-county Kenyan police commissioner. Malindi is a resort town on the outskirt of Nairobi, the Kenyan Capital which attracts Tourists from within but mostly from outside Africa.

Sexually transmitted diseases including the deadly HIV/AIDS continue to spread rapidly within these coastal communities due mostly to this booming market of pedophiles and perverts in Kenya today.

Although Kenya is in the news today, it is not just Kenya. This barbaric and horrible acts continue to flourish in several other African countries. In fact, we have written several articles and stories about commercial sex tourism in the past. We thank God "Commercial Sex Tourism" is now in the news and getting some exposure.

Because several poor countries in Africa lack child protective laws, pedophiles and perverts around the globe are turning Africa into a "child-molesting paradise" where they come in their numbers to molest young boys and girls. Even in places like South Africa, Ghana, Nigeria, etc., where these protective laws exist, they exist only in books. There is very little to no enforcement of these laws at all. In the past, the Americans and Europeans made up a greater of the number of international pedophiles and perverts in Africa. Today however, even the so-called "business partners" who come all the way from China, end up molesting little boys and girls in Africa without any consequences.

Although East Africa is in the news today, it is not just in East Africa. This barbaric form of tourism continues to flourish in several West African countries too. Countries like Senegal and Gambia have become hotspots for international pedophiles and perverts . In places like South Africa, some of these pedophiles and perverts often target Junior High School girls in what is popularly known as the "sugar daddy" relationship. This also explains why teenage pregnancy rates and HIV/AIDS are on the rise in South Africa today.

This is the situation in Africa today. Young boys and girls are sexually molested to the point where they cannot even hold their stool yet our leaders are doing almost nothing about it. Pedophiles and perverts from all corners of life are heading to Africa and our leaders are doing nothing to stop them.

Steve 2 years 11 months
Beyond sad and depraved. My God, the poor children.