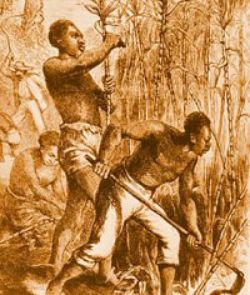 This is also a follow-up to an article I wrote some time ago about the transatlantic slave trade that took place in Africa some centuries ago. I have received several emails and questions concerning the mode of trade and the taxation system that was in place in colonial Africa and I will try my best to answer some of those questions in this post.

To begin with, yes there were some well-established market systems in Africa before the arrival of the Europeans with some regulations. It is also true great empires like the Old Ghana Empire (the first great African empire of the western Sudan. From year 300 to 1235), the old Malian Empire (founded by Sundiata Keita.  From 1230 to 1600), the Songhai empire (1375-1591), and several other great empires all had well established market systems and even “currencies” (mostly pieces of gold and silver).

However, the idea of modern-day monetary system or currency in trading was something very foreign to most communities in colonial Sub-Saharan Africa. Most communities in Africa practiced what is known as “Barter Trading”.

So how exactly was the barter trade carried out? Let’s say I have no yam but I have salt in abundance and my next door neighbor has some yams and would love some of my salt. I go straight to my neighbor with some of my salt and ask if he would love to trade some of his tubers of yam for some salt. The number of tubers of yam I get would depend on the amount of salt I can give in return. That was one form of barter trading. It was that simple. This was possible because both parties involved spoke a common language (for example, a trade between 2 Akans.  2 Ashantis or An Ashanti and a Fanti, etc.). Now imagine a situation whereby my next door neighbor speaks a totally different language. It would not be that easy reaching an agreement and the only way out was through another form of barter trading. The language barrier was so great in colonial Africa that the only system of trading possible in most parts was this new form of barter trading.

In this barter trading, I take some of my salt to a market square or a spot where my neighbors can easily see it and then signal my neighbors that I have placed some items (for sale) at that spot by beating a drum, a gong, a flute, or something to attract their attention. I can then leave the item there and go wait somewhere. A neighbor will then come and place some yams beside my salt and also leave. If I come back and see the yams and think it is a fair deal, I take the yams leaving the salt. My neighbor can then come and take the salt away. However, let’s say I was expecting 3 tubers of yam for my salt but my neighbor placed just 1 tuber of yam. Since it is not a fair deal, I take some salt away leaving the rest with the tuber of yam. If my neighbor comes back and finds it a fair deal, he takes the salt leaving the yam for me. We may repeat this several times until a fair deal is reached and both parties involved are happy. Someone may ask; how could my neighbor tell I needed yam and not cocoyam? Imagine a situation whereby my neighbor places some plantains instead of yams beside my salt. To make things easier for both parties involved, I place some yam peels or something like that beside my salt to signal to my neighbor that I am interested in yams and not plantains.

Although it sounds like it would take forever for one transaction to be concluded, it was much faster in the market squares (places set aside for such transactions) where several people could easily see your item. It was much similar to the modern-day "bidding" system. This was the system of trade in place in colonial Africa before the arrival of the Europeans.

Direct taxation and modern-day monetary system or currency was introduced into colonial Africa by the colonial masters (the Europeans) and it was a way to compel the locals to work against their will and also to create an efficient way for the Europeans to easily outsource the locals. I will come back to this point.

Before I continue, please note that there were some very well established traditional government systems in Africa before the arrival of the Europeans. The King was the head of government just like the president in today’s world. The King did not run the affairs of the land all alone. Every King had some council of elders chosen from the various clans and communities within the kingdom. The council of elders represented their various clans, towns, and communities and acted just like the members of parliament, ministers, senators, etc.  in modern day government systems. The council of elders helped the King in decision makings and carried the voices of their people to the seat of government just like in today’s world. The queen mothers were mostly in charge of women and children affairs.

When the Europeans came to Africa, they took advantage of those well-established structures in place already in Africa and manipulated those structures to their advantage. For example, any kingdom or empire the British conquered in Ghana came under the “protection” of the British Monarchy and therefore had to pay “homage” to the British crown through taxes. The British introduced several forms of taxes including the famous “hut tax” which was per hut or household basis. These taxes were very important to the colonial masters. In fact, the entire colonial economy depended upon black African labor to build new castles and forts, build new towns, railways, work in mining fields, etc.

The Europeans introduced the modern-day monetary system to colonial Africa so as to compel the locals to work. This was because the taxes were paid either with money or labor and the only way to get money to pay your taxes was to work for the Europeans. So the locals were compelled to work for the Europeans so they could get some little money to pay their taxes.  Failure to pay taxes resulted in deaths, beatings, public humiliations, etc. Traditional leaders who stood up for their people and spoke against the numerous taxes were either flogged publicly or shot dead. Several locals lost their lands and properties. Entire villages were set ablaze by European forces just because some locals refused to pay their taxes. The taxation system introduced by the French colonial masters for example, forced farmers in French-ruled Sudan to migrate seasonally to Senegal to work in the groundnut fields there. Subsistent farmers were forced to grow European cash crops instead of local food crops so they could get some money to pay their taxes. Anyone who did not grow cash crops in great quantity had to sell their labor. Laborers traveled to work on cocoa plantations and to cut timber in the Ivory Coast (Côte d'Ivoire), etc.