America and Immigrants: The impact of immigration part 2 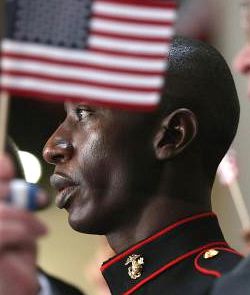 Taking immigration and its effects on the age structure of America into consideration, Steven A. Camarota, the Director of Research at the Center for Immigration Studies said, Immigrants who have arrived in the last two decades plus all of their U.S.-born children have only reduced the average age in the United States from 37 to 36 years. He continues to say that, all levels of government provide services to children therefore, it is necessary to understand the effect of immigration policy on the number of children being born in the United States in order to better anticipate spending on services, especially public schools.

Births to illegals now account for nearly one out of every 10 births in the United States. He concluded that, the large number of births to illegals shows that the longer illegal immigration  is allowed to persist, the harder the problem is to solve. Because as U.S. citizens these children can stay permanently, their citizenship can prevent a parent’s deportation, and once adults they can sponsor their parents for permanent residence according to U.S. immigration laws.

The issue of illegal immigration is a threat to the American economy for it is believed that most illegal immigrants take the law in their own hands and engage in all sorts of anti-social behaviors. In fact, when such cases happen, it is very difficult to apprehend such people because of unstable identity. Detective Mike Connors a member of the New York Drug enforcement task force in Queens 1982 said “If it’s coke-related”, “it’s mostly Colombians” who are mostly illegal immigrants.

Mayor Fernando Wood in an address to the city’s leading citizens believed that Irish and German immigrants were devoid of respect for the law. Wood warned that the “evil upon all who come within range of their depraved minds” had become a matter “exceedingly serious and demanding immediate and complete eradication.” ( Bogen.1987.). “The simple fact is that we must not and we will not surrender our borders to those who wish to exploit our history of compassion and justice.” And “when people enter this country illegally and commit crimes whiles they are here, it is not fair to ask the states to bear the entire cost of their imprisonment”. (President Clinton.). And so, “…..we must say no to illegal immigration so we can continue to say yes to legal immigration.” (Vice president, Gore).

More over, as an important section of the United States immigration laws, before one is given a permanent residency green card, legal immigrants must demonstrate that they are free from communicable diseases and drug addiction. However, an illegal immigrant who walks across the borders unchecked comes in healthy or sick.  According to Dr. Madeline Cosman, Polio was eradicated from America but now reappears in illegal immigrants. Intestinal parasites were mostly obliterated. He said “Our fine sanitation and microbe-safe food supplies made them disappear. But they are back in the bodies of illegal Aliens”.

Malaria was obliterated but now is re-emerging in Texas and other states. “No mosquito that bites a person infected with malaria checks identification papers before biting another person to transmit debilitation fever”.  Dr. Cosman continued to say that, the infectious disease called Kawasaki claims the lives of about 4000 young children under age five every year in America. Youngsters develop fever, red eyes, “strawberry tongue” and acute inflammation of their coronary arteries and other blood vessels. Many suffer heart attacks and sometimes even death.

Also disease like Leprosy which was sometimes called disease of the soul in Biblical days and medieval Europe, so horribly destroys flesh, faces and fingers. Lepers quarantined in leprosaria sounded noisemakers when they ventured out to warn people to stay far away. Leprosy or Hansen’s disease was so rare in the United States that for 40 years only 900 people were afflicted. However more than 7000 cases of leprosy are now reported. Leprosy is now endemic to northeastern states. There are now leprosy clinics in New York City. According to Dr. Cosman, illegal Aliens and other immigrants brought leprosy from Brazil, Mexico, India and the Caribbean.

Apart from its economic or fiscal impacts, immigration is also playing a very important role in the transformation of the American society. Despite the fact that immigrants are transformed by America, most immigrants will shed or at least contain their native cultures while embracing the mores and languages of the host country. This accounts for the over thousand different languages and cultures in America. This emergence of segmented assimilation has convinced some people that immigrants emphasis on diversity and ethnicity threatens the traditional “melting pot” of American society. As the Washington Post reported, “There is a sense that especially as immigrants population reach a critical mass in many communities, it is no longer the melting pot that is transforming them, but they who are transforming American society.” Most immigration advocacy and ethnic groups view “assimilation” as a dirty word, and prefer metaphors such as “Salad bowl” and “mosaic” to describe the sense of separate identities within one nation. Aside this, intermarriage as an indicator of societal integration is very common within such societies.

In his opinion, Mr. Brimelow, a Forbes magazine senior editor, makes what many consider a strong case of restrictive immigration policy. He argues that unless the flood of newcomers to America’s shores is halted or at least curtailed, the United States will become a nation of ethnic fiefdoms, each pulling in a different direction. If present trends continue, Brimelow writes “Americans themselves will become aliens to each other”. However, according to the one hundred seventh Congress, first session on October 17, 200l, America’s immigration policy is based on a number of values that relate to the core social and economic principles on which the nation was founded.

These values are complementary and interweave to create the rich fabric that is beneficial to all Americans. Among the most important values are the unification of American families, employment related immigration to keep America Strong in a global economy; asylum protection for refugees fleeing persecutions; Naturalization based on allegiance to the principles contained in the constitution and laws, a system based on law, with fair , uniform, and predictable requirements.

looking at some of these factors and many others, Bonjas and Tienda in the “Hispanic in the United States economy” therefore concludes that increased knowledge of the socioeconomic standing of this significant and growing proportion of the populace and better understanding of the workings of the labor market of the sort should lead to better opportunities for all minorities which means greater progress for the entire economy.

Part 1: America and Immigrants: The impact of immigraiton

9. One hundred and seventh Congress, first session; Hearing before the subcommittee on Immigration of the committee on the Judiciary, United States Senate. October 17, 2001. Serial No. J-107-45. U.S. Government printing office, Washington. 2002.