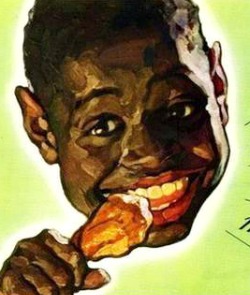 The truth however is that, we Africans love chicken and so are our gods. Yes, Africa loves chicken and chicken loves Africa. It is almost a mutual friendship. Chicken is more than just food in some communities in Africa, and I will come back to this point.

I was shocked when a friend of mine who returned from America years ago, came down with the story that most black people in America find it very uncomfortable eating chicken in public places. When we asked him why? He said, it is a stereotypical view in America that black people love chicken and watermelon. That sounded quite funny to me at first. Why? Because, to me, if you are not a vegetarian but you hate fried chicken, then there is something very wrong with you. Just imagine a ball of watermelon on a hot summer afternoon.

Chicken in the African culture is more than just food. In the olden days in Africa (and even today in some rural communities in Africa), just like in biblical times, anytime someone offended the gods of the land, they had to pacify the gods, which mostly included some blood sacrifices. The easiest and quickest way to pacify the gods was with chicken or eggs. So they often sacrificed chicken and eggs to pacify the gods. In most cases, the blood of the chicken is sprinkled on the altar of the gods as a sign of atonement just like in the old testament of the Bible. The meat is then cooked and shared.

In the traditional African religion, an egg and a full chicken carry the same weight, so sacrificing a chicken is the same as sacrificing an egg. However, as a sign of respect, the eggs often came in dozens (12s). Although sheep, goats, cattle, etc. are all used for sacrifices, chicken was and remains the most affordable and easy to come by, so sacrifices were and are often made using live chicken. Maybe this explains why so many Africans, including our brothers and sisters in America, held and continue to hold chicken in such high esteem. Chicken is a favorite meat we share with the gods.

Chicken goes well with almost any dish. From jollof rice (favorite in Liberia), to fufu and palmnut soup (favorite in Ghana), all the way down to eba and egusi (favorite in Nigeria). Chicken remains the undefeated heavyweight champion.

Pork is something I personally hate. In fact, eating pork is even considered a taboo in some communities in Africa. And I can’t imagine myself eating dog meat. But chicken, I love chicken!

Orlando Coombs 4 years 3 months
I don't eat chicken and meat period. I quite eating meat years ago. I do eat fish cause that's food from the sea. Eating pork is terrible. Food is a weapon used against black people all over the globe by the white powers that be. Monsanto and other Satan controlled corporations produce Frankenstein foods out of monetary greed and for population control to kill people. The fast food conglomerates, the food production companies, the pharmaceutical companies, and the major governments of the world are in cahoots with one another to depopulate the earth. These guys are devils. Satan is real. Very real. But God is so great that he's blessed us with the ability to grow organic fruits and vegetables. And he gave us these things naturally too.

Brian 3 years 1 month
All the food we have contact with is contaminated to some degree, even fish and plant food! So, you can fool yourself into thinking your eating healthy if you wan't! Bone appetit! Below, is just a bit of information on how "healthy" fish eating is...

The Food Pyramid Doesn’t Include Mercury. As fish live and eat in our chemical-laden waterways, mercury accumulates in their systems. And people who eat those fish may as well bite into a thermometer. Mercury poisoning has been known to cause nervous system disorders and reproductive issues as well as developmental problems in children and unborn babies. And many of the fish with the highest concentrations of mercury are the same ones people are devouring by the plateful: walleye, king mackerel, marlin, bluefish, shark, swordfish, wild sturgeon, opah, orange roughy, Chilean sea bass, blue crab, lingcod, Spanish mackerel, spotted seatrout, wahoo, grouper, snapper, halibut, tilefish, rockfish, sablefish, and tuna (including blackfin, bluefin, bigeye, albacore, and yellowfin varieties).

Fish is just as bad for you. As one of the commenters said; fish contains mercury. And as you well know, mercury isn't very good for you.

Whitey 2 months 26 days
I love chicken too! Who doesn't? I think it's just a funny stereotype about Africans/African Americans. We mock the things we love! Peace and Love cousins!