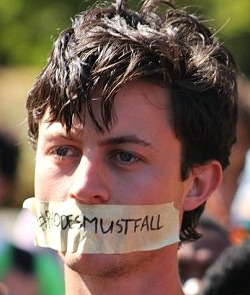 The racial issue in South Africa today however, isn’t just a problem of wrong identity. It is also a problem of economic and social injustice. Although apartheid (the worst form of racial discrimination the world has ever known) is “over” on paper, apartheid still exists in the hearts and souls of some people today and unless the roots of apartheid are completely and permanently removed, racial issues will forever remain hot topics in South Africa just like in the United States, Brazil, and other racially-charged communities around the world.

Because of the great sacrifices made by Nelson Mandela and others, South Africa is in a better shape today than it has ever been but that doesn’t necessarily imply those problems Madiba and others fought against are completely over. The structures of apartheid remain in the very fabric of the South African society and those structures continue to discriminate, oppress, and deny access to some of life’s possibilities to millions of people (blacks, whites, mixed, etc.) all across South Africa.

Some white South Africans have worked and continue to work very hard to build better lives for themselves and their families. Most of these hardworking white South Africans had nothing to do with apartheid. In fact, most of them were even victims of that oppressive system and I think it would be rather unfair to discredit all their hardwork and dedication.

Nicola Gibson 4 years 4 months
I wonder if it would be revealing to do a little bit deeper analysis on crime. In most places of the world crime happens within groups. In America most whites are criminalized by whites and Blacks criminalized by Blacks. When these are the trends, it becomes fairly easy to see trends in racially motivated crime. You should be able to see in the crime statistics, if you dig deep enough, whether there is a similar amount of white on black crime and black on white crime when statistically normed. My understanding is that this is not the case in South Africa – that black on white crime that is explicitly racially motivated does not have a reverse counterpart that could be termed by any international group as "genocide". Remember, genocide isn't the same thing as a very high crime rate. Genocide is the intentional attempt to wipe out an ethnic group because of their ethnicity. This is apparently happening in South Africa, though slowly. This also doesn't take into account racial discrimination in job quotas, or the number of South African whites in camps that the government will not allow improved, and that the people can't leave.

People tend to forget that in extreme cases of interracial injustice there is not just one profound negative effect but two. It is not only that group in power loses their ability to be just, the group that is oppressed usually loses their capacity to be free. Both of these need to be radically rehabilitated. Internationally we have focused more on the first than the second. This tends to lead to huge lags in economic success for the previously oppressed group, and when affirmative action is used to even proportions, usually there are extremely negative economic costs and there is a very negative result in government administration. This also appears to be the case in South Africa. The oppressors were also competent, and competencies that are normal among free people often lag precipitously after systems of oppression are lifted. This is one of the reasons some of the attempted cures in places like South Africa have had such disastrous consequences economically and politically. The result is always fomenting hatred on both sides, which will often lead to violence, and when that violence is racially motivated, to genocide.

One must always remember that whatever can be said to Mandela's benefit, he was a Marxist, and his solutions were Marxist. The violence bill to Marxist solutions always comes due. Marxist radicalism always breeds hatred, class division, and intergroup warfare. Apartheid could never be the solution for the future of South Africa. I think equally that Marxism cannot be the future solution for South Africa either. A fundamentally third option must emerge. It may be able to be forged out of the dialectic of the two. If people embraced a certain amount of social consciousness that Marxism points to and merged it with a kind of hatred rejecting unity creating Christianity of the Dutch reformed tradition, perhaps there could be some possibility of both peace and justice. But this is does not appear to be South Africa's current trajectory, and in the short term something must be done about the major failures and governmental administration, crimes against rural whites, and a horrific crime rate suffered by everyone, but disproportionat ely by poor Blacks. In my view, South Africa needs both a religious revival and a Second Amendment.

Mduduzi Khumalo 2 years 5 months
There is no discussion about this. White people in our country have no place here because they don't belong here. These people deceive us with their satanic behavior. They must go, and there is nothing called "white south African". That's nonsense! Why do mix race with nationality? Just because we accommodate these devils in our country. No, white is a race and South African is a nationality so where did this white + South African came from? We are tired. We want our land back. The whole Orania belong to us not to them. Why should the white minority live first-class life in a "third world country" while the more than 80% of blacks live under poverty?