Voodooism the mother of all religions 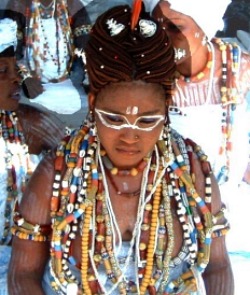 Human skulls, blood sacrifices, demon-possessed dolls, snakes, mysterious priests and priestesses, etc. Such is the image the media often portray. Unfortunately, this seems to be the perception the general public holds whenever “voodoo” is mentioned. Some people consider voodoo nothing but an archaic ancient pagan religion full of nothing but darkness, sorcery, witchcraft, demons and blood. But is voodoo really that evil?. Do voodoo worshippers believe in the supreme God at all?. Why do voodoo practioners worship ancestral spirits and lesser gods?

To begin with, yes, despite the numerous “versions” and “sects” in the traditional African belief system, the belief in an almighty, all-powerful God is central throughout. Traditional African worshippers (or voodoo worshippers) do believe in the existence of an omnipotent and omnipresent God just like in the three major abrahamic religions (Christianity, Islam and Judaism). There may be several names for this supreme being depending on which part of the world you go but the fact remains, it is the same God.

Also, Traditional African believers believe and worship ancestral spirits the same way most Christians (especially Catholics) do believe and pray to saints. Saints are also ancestral spirits. In fact, the parallels between voodoo and Christianity are so strong that even Pope John Paul II spoke at length about the esteem with which he held practitioners of voodoo, acknowledging the “fundamental goodness” inherent in their practices, teachings, and beliefs. Pope John Paul II even attended a voodoo ceremony in 1993.

Voodooism is the mother of all religions and almost all religions in the world today had their roots in voodooism. Yes, the roots of voodooism predate any known religion in the world today. In other words, voodooism has been around in Africa since the beginning of human civilization. Contrary to media portrayals, there is a central moral code in voodooism that forbids the harming of other people. Yes, voodooism strictly prohibits the harming of others. Voodoo is a spiritual expression and a way of life and has nothing to do in common with witchcrafts or any of that sort.

Some people consider voodooism a violent religion because of the “blood” sacrifices. However, voodooism isn’t the only religion that practices blood sacrifices. In fact, most of the major religions in the world today including Christianity, Islam, Judaism, Hinduism, etc., all practiced and most continue to practice blood sacrifices even today. In other words, voodooism is not as violent as the media (especially in Hollywood movies) often portray the voodoo religion to be. Compared to other religions in the world today, voodooism is without a doubt, one of the most peaceful religions we have.

The practice of voodoo comes in many forms and just like there are several churches, sects, and several denominational groups in the world today, there are several types and forms of voodoo practices. From Benin (the motherland of voodoo) to Ghana and Togo. From Haiti all the way to the city of New Orleans in Louisiana on the Mississippi river. From Mexico to Cuba and all the way to Brazil. The list goes on and on. Voodoo evolves and adapts along the way as we see in religions like Santeria.

In other words, voodooism is not some “archaic” ancient religion. Voodooism is a modern religion practiced by millions around the world and has officially been the national religion of Benin since 1996. Despite the numerous forms and types of voodoo all across the world, the central moral code in voodoo practices remains. Voodooism strictly prohibits the harming of other people. Voodooism cherishes nature and respects the environment. Voodooism cherishes the natural order of things and respects both the living and the dead.

#1 Edward
Predating something doesn't make it the mother of that thing. Whales predate humans but humans aren't descended from whales. There may be similarities between voodooism and Christianity but I doubt if Jesus, a Jew, learned voodooism and then changed it a little into Christianity. The author's attitude seems to be "Black people created voodoo which evolved into most of all the other religions. Give us black people some kudos."
Quote

#2 Baba Yara
@ Edward ...
You got it all wrong. The word "mother" here does not necessarily imply "predate". It rather means "evolved". Humans did not come from whales. However, it is scientifically proven humans evolved from monkeys and that is why we share about 98% of DNA. In other words, "mother" in this case is more like evolution. All the other religious bodies in the world today evolved out of voodooism and that explains the similarities. Therefore, there is absolutely nothing wrong in saying "voodooism is the mother of all religions". Also, I humbly disagree with you about Jesus and Christianity. Jesus is not the founder of Christianity. Jesus came to meet Judaism and expanded the teachings of Judaism. In other words, Judaism is the mother of Christianity. Also, Jesus did not need to study himself. Rather, his followers were the ones who needed to study Christ and it was that need to study the life and teachings of Jesus after his death that we got Christianity.
Quote

#3 Saffa Koroma
Everyone has a fundamental human right to believe what he or she wants to believe. The theories of Evolution have for centuries remained to be only theories and they will always remain to be so.. By no means has science given an iota of proof that man evolved from Apes. It is very inconceivable for great minds to think that man(generic) with his/her complexity in anatomy, physiology, and high level of intelligence could have evolved from a monkey, a gorilla, or chimpanzee. It is very evident that from the beginning of time, man has had dominion over all of God's creatures including Apes. Man has tamed and continues to tame these Apes and sometimes using them as pets. It is abundantly clear that a supreme being, an omnipotent omniscient and omnipresent God created man in his image and after his likeness, thereby giving him/her dominion over all of God's creation including those Apes. The scientists are just involved in academic gymnastics though which they misinform weak minds. But them believe what they desire.
Quote

#4 Augustus Caesarean
I am most humble, and I believe in all gods. I am also, myself, cherished among all people from sea to sea.
Quote
Refresh comments list
Add comment