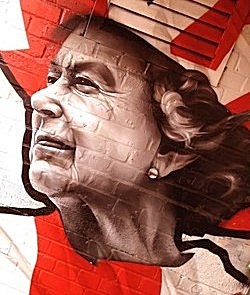 The "gracious" queen continues to shake the poor and the innocent with robotic arms. Although we the poor people of the world believe in handshakes, we pray the good Lord shakes the queen on our behalf for we are not comfortable at all with her robotic handshakes. "Britain welcomes the best and the brightest" and by best and brightest, the "noble" queen only means the "rich" and the "extremely rich".

So the rich and the extremely rich can freely enter and exit the United Kingdom without anyone questioning them. The rich can enter freely but what about the poor and the innocent? The answer is quite simple. There is no place for us in the UK according to the queen unless we the poor people pay the queen about $5000 dollars in advance.

The UK Home Office has announced a pilot scheme (An immigration scheme) under which most visitors from six "high-risk" Afro-Asian countries, including Nigeria (the most populous country in Africa with a population of about 160 million people), India (the second most populous country in the world), Pakistan, Sri Lanka, Bangladesh and Ghana, will be required to furnish a 3,000 pounds bond for a six-month visit visa, which they will forfeit if they overstay in Britain. In other words, before people from any of these third world countries are given visa to visit the United Kingdom, they would be required to pay 3000 pounds (almost $5000) in advance to the UK to serve as a bond all in an attempt to prevent visitors from overstaying their visit. The question is, how many poor people from these poor third world countries can afford to pay the said $5000 bond?

This extremely racist and discriminatory plan was first introduced by the current British Home Secretary Theresa May. According to Mrs. May, "This is the next step in making sure our immigration system is more selective, bringing down net migration from the hundreds of thousands to the tens of thousands while still welcoming the brightest and the best to Britain,". Yes a very "selective" plan indeed. Quite racist and discriminatory just like most of their other plans in stock.

It may surprise you to know that the United Kingdom colonized these and many other third world countries. In Ghana (which used to be Gold Coast because of the abundance of gold) for example, the United Kingdom managed to suck the land dry and reduced Ghana to nothing but yet another poor wretched British colony. Now the British don't want the poor people from such countries to come affect them with their poverty. Yes such is the handwork of a "gracious" queen.

Yes it is true illegal immigration hurts the economy and it is the responsibility of every responsible government to find proper ways and means of dealing with this problem so as not to put its citizens in economic strain and yes I am all for dealing with illegal immigration in proper ways. However, I personally wasn't expecting such racist and extremely discriminatory plan to come out of the UK when there are several other proper ways of dealing with the issue of illegal immigration. This extremely racist and discriminatory plan even goes against the so-called 'special relationship' between countries publicized by the UK government. This plan will not only affect business relationships but will also further bring down the number of students going to UK for higher studies and affect the tourism inflow from countries such as India and Nigeria to the UK. Yes we pray the good Lord shakes the "gracious" queen on our behalf for we are very sick and tired of her robotic handshakes.