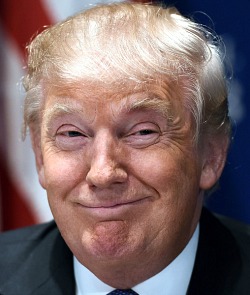 Truth is dead and wisdom is currently on “life support”. Hatred has risen to the highest office and compassion is nowhere to be found. This is the story of America and this is how America disappointed the rest of the world. We never thought in a million years that America of all nations could descend so low. America rudely spat in the face of truth and common sense. America rudely spat in the face of peace and progress and America will never be the same again.

One other thing we learned from the 2016 elections is that, America is not the “land of the freed” and the “home of the brave” like some people often say. Rather, America is the land of hypocrites, the land of racist bigots and the land of cowards.

Even when James Comey and his corrupt FBI department were busy pulling massive tricks days before the elections, we never lost hope. We still believed in the goodness of Americans as a people. Unfortunately, we were very wrong. America has proven us all wrong. Even some Catholic priests and other Christian leaders in America were in the news supporting Trump. This is why I said America is the land of hypocrites. Is Christianity that blind? Well, according to a friend of mine, if this is what American Christianity is all about, then to hell with that kind of Christianity.

The Klu Klax Khan (KKK) openly endorsed Trump and they celebrated Trump’s win with a huge rally. These are the type of people Trump has given voice to. Although all racial groups are racist to some extent, the “male white” population of America took things to a whole new level the 2016 election season by electing Trump. Many say Trump is a business man and the best for the economy. Some say Trump, a guy who started with a “small loan” of just 14 million dollars from his father, is the best choice for the poor and the needy in America. Some even say Trump knows how it feels to live from paycheck to paycheck and is therefore the best choice for the millions of people living from paycheck to paycheck.

Portions of the “male white” population feel some minority groups in America are taking over their beloved country and will do anything to get their country back. Barack Obama’s 2008 win was such a major blow to their faces and that somehow explains why most of them waited hours upon hours this time around just to vote massively for their king and “savior” Donald J. Trump. Crazy Trump has vowed to destroy all that Obama has worked so hard to achieve in the last 8 years and that was why I said America rudely spat in the face of peace and progress.

The saddest part of all these is that, not only America suffers at the end of the day. In fact, the entire world suffers. With the Trump win, the love and respect some of us in the outside world had for America, just faded like blue jeans in acid wash. There are still some good people in America and the world and for that reason, there is still hope. However, America will never be the same again.