The world of Infanticide and Abortion 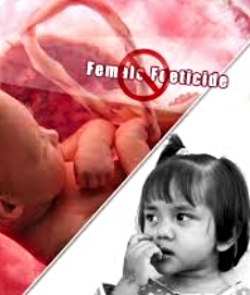 According to India’s minister for women and child development, Maneka Gandhi, about 2,000 girls are killed in the womb every day. This equates to about 730,000 girls killed in the womb every year in India alone. The scientific term for this is feticide (US) or Foeticide (UK) and it is the act of destroying a fetus or causing an abortion. In the case of India, it is sex selective feticide because it affects one gender more than the other and since the female gender is targeted in India, it can be referred to as female feticide/foeticide. In other words, the 730,000 does not include girls killed after birth and it reflects only the reported cases. India is a male-dominant society. In other words, culturally, sons are more preferred than girls in India.

Also, in the case of India, some parents kill their baby girls so that the family doesn't have to pay a dowry when they get married. Culturally, it is the duty of the parents of the bride to pay dowry to the groom and his family. The dowry consists of large amounts of money and valuable goods. For families with several daughters, this can be a serious financial burden, and this explains why some families go to the extent of terminating pregnancies and killing female babies right after birth. Infanticide is the act of deliberately causing the death of a very young child (under 1 year old) mostly by their own parents. India’s child sex ratio was at 914 females for every 1,000 males in 2011.

Unlike in India, in China, the family of the bride does not have to pay dowry when Chinese women marry. In other words, dowry isn't a significant contributing factor to the issue of infanticide in China. However, The 1979 "One Child Policy" by the Chinese government led to a major gender imbalance worse than India's. Faced with the prospect of only having a single child, most parents in China preferred to have a son. As a result, some Chinese parents either gender selectively aborted their pregnancies, murdered their newborn baby girls or just abandoned them after birth. Eventhough it has been abolished, this barbaric practice continues in today's China. Also, according to some scholars, the old Confuscius (an ancient Chinese sage) way of life, whereby sons were considered more precious than daughters, still plays a major role in today's China and thus, a major contributing factor to the issues of gender selective abortion and infanticide in the Chinese society.

The deliberate act of a parent killing their own child is referred to as felicide. To most people, killing of a newborn child is an incomprehensible crime. Sadly however, this crime occurs more than we think and in most cases, the crime is committed by the parents of the child. According to parental infanticide researchers, mothers are far more likely than fathers to be the perpetrators of neonaticide and slightly more likely to commit infanticide in general.

You may be forced to think most mothers who commit these barbaric crimes are mentally unstable. However, research has shown that, less than 30% of mothers who kill their newborns are seen as psychotic or depressed. In other words, about 70% of mothers who commit these crimes are mentally OK. Neonaticidal or Baby-killer moms almost never seek prenatal medical care and fail to make any advance preparations, experts say. They often hide their pregnancies out of fear of rejection by loved ones.

A new study in Kenya has found that 45% of mothers interviewed by a leading charity faced pressure to kill their babies born with disabilities. The survey found that the situation was worse in rural areas - where the figure could be as high as two in every three mothers. The sad truth is that, in some parts of Africa (especially in the rural and sub-urban areas) some disabilities are often associated with taboos and curses. In other words, when a child is born with a disability in some communities in Africa, that child is sometimes considered a curse on the family and the community as a whole. Some families and communities therefore go to the extent of killing those children mostly in the dark so the world doesn’t see. Parents with disabled children often face isolation, rejection, and sometimes banishment from their communities. This unfortunately sometimes pushes some parents with disabled children to do the unthinkable. In fact, Most of the women with disabled children interviewed by Disability Rights International in Kenya said their children were considered "cursed, bewitched and possessed" and that a belief prevailed that the mothers were being punished for their sins, including being "unfaithful to their husbands".

Sadly also, some people in Africa practice infanticide “out of love” to end the sufferings of the children born with disabilities. Some believe infanticide is in the best interest of some newborns with disabilities. Infanticide remains a major crime throughout Africa. However, most of the cases go unreported. It may surprise you to know that, infanticide is the second-most common reason women are in jail in Senegal (second only to drug trafficking).

According to the United Nations Office for Human Rights in West Africa, about 20 percent of the total female prison population in Senegal, is in prison for the crime of infanticide. Some Rights groups blame Senegal’s very restrictive laws on abortion.