The War Criminals: Africa and the West 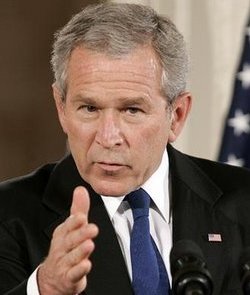 The world today is full of criminals and the western world is no exception. Almost all western politicians and leaders today are criminals (most of them war criminals). At least 95% of all American leaders including presidents, vice presidents, and other statesmen (including those in history) were/are criminals with most of them being war criminals. The sad truth however is that, most of these criminals walked and some continue to walk freely today. Some have won the Nobel peace prize and other prestigious awards despite their evil deeds.

If so, then why is it that only African leaders are tried at the Hague or forced out of office (with bullets in their heads) and their bodies dragged through the streets?

Yes, most western leaders are criminals and they go scot-free with several medals in their honor. Take America for example. I cannot list them all but here is a sample. Let's begin with Robert McNamara. McNamara helped killed not less than 3 million poor innocent Vietnamese, Laotians, Cambodians, etc. when he was the US secretary of Defense. It may surprise you to know that McNamara was a highly respected elder statesman and walked freely with several medals in his name until he passed away in 2009. Another war criminal by name Henry Kissinger whose dedicated efforts helped McNamara and colleagues murder all those innocent people in addition to his own killing adventures in countries like Chile under the sponsorship of US foreign policy, won a Nobel Peace Prize for his efforts.

Of course most of you know or at least have heard about George W. Bush and all the war crimes in his name. To those of you who don't know about George W. Bush, I will suggest you Google and read something about him especially the "Iraq war" and the untold number of poor Iraqis who lost their lives. Although often forgotten, the father of George Bush, George H.W. Bush or "George Bush Senior" also had and carried out a similar evil plan. George Bush Senior who used to work for the CIA (the Central Intelligence Agency) before becoming US president, helped encourage the Iraq-Iran war which resulted in not less than 1 million deaths. This opened the doors for US oil and arms dealers to profit greatly. George Bush Senior even helped encourage US sponsored military dictators in places such as Latin America and had hands in the extermination of thousands of ordinary citizens, via US-trained "death squads". Mobutu Sese Seko of Congo, one of the worst dictators in African history, was George Bush Senior's very close friend. Both George Bush Senior and his son George W. Bush are senior Statesmen and walk freely today with several medals in their honor. Madeline Albright, Dick Cheney, Paul Wolfowitz, Donald Rumsfeld, Ruppert Murdoch and many others were/are all war criminals with several war crimes in their names yet walked freely and continue to walk freely today in America with no one questioning them.

So you see, the western world is full of criminals. It may surprise you to know that almost all corrupt leaders in Africa today are sponsored by the west. My question then is, why is it that only African leaders are tried at the Hague or forced out of office (sometimes with bullets in their heads) and their bodies dragged through the streets?