The United Nations: The Poor in a Net 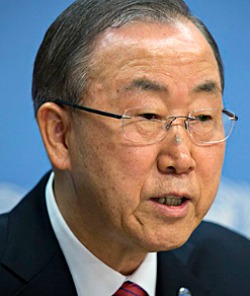 The United Nations just like the IMF, the World Bank, the WTO, etc. are all evil organizations created by the greedy rich to manipulate the lives of the poor and the innocent. The United Nations decided to abandon Rwanda during the Genocide of 1994 (in which close to a million people died). Why? Well, it is because there was no profit to be made in Rwanda.

Meanwhile, the United Nations was more than ready to sponsor some armed groups to go overthrow Gaddafi in Libya because Gaddafi's idea of a common currency for Africa (The Gold Dinar) would empower Africa and give Africa a greater say at the international market. The Big players benefit because now they are able to buy the rest of the world at very cheap prices all in the name of the "greater good". The poor will continue to be poor while the greedy rich continue to enjoy as long as we the miserable poor people of the world continue to ignore the evil nature of some of these so-called good organizations.

#1 Joe Mrnka
Many of us who call ourselves conservative in America were called crazy for saying that the UN is bad for the world. The UN is nothing more than the playground of the rich and connected that want to play God. Complete with their little UN army, UN bureaucrats and UN apologists. The rich apologists are quite happy to cover up the failures of the UN.
Quote

#2 BRIAN MAOBE
when i look at the current situation that Africa is at the moment i feel like crying because we are used as toilet papers every now and then.The powerful nations use the power they have to exploit us and to play with our minds.Yes we can say we are free but only in theory not in practical conception.Every activity we do is always governed by those big countries as if we cant stand on our own.the UN uses its veto powers to design the kind of government we have 'yes we choose leaders but do you the UN decides who should lead us that we are always crying about corruption which is indirecly induced by the big governments who govern us in every occassion .Very bad indeed...
Quote
Refresh comments list
Add comment