The Old and the New Sudan share similar challenges 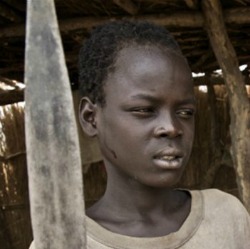 Sudan is one of the largest countries in Africa, it boasts of its large population, diverse culture, river Nile and natural resources mainly fish and oil. The nation is divided; the Muslim north and the Christian south. It has been engaged into a civil war for a lot of years with rebel groups from the north not only fighting with the government from the north but also against other rebel groups.

With claims of discrimination having been raised due to the religion factor and also some form of 'racism' as the northerners are 'brown' while the southerners are distinctively dark. This led to a lot of killings, millions fleeing homes as refugees and the south wanting separation and form their own state and government.

After the Sudan's government signed a peace agreement with Sudan's People Liberation Movement (a reputed rebel group from the south) in Naivasha, Kenya a lot of people have returned home. Freedom and peace is enjoyed in the state and a lot people trying to reconstruct their lives and lifestyle.

Although a certain group is still not free, women. Women on the north face a lot of challenges especially indecency laws, there's a problem with women wearing pants. Recently it turns out that wearing even a skirt will not keep you safe due to the Islamic sharia laws which are termed conservative by others.

The confusing thing is that the Christian south is not subject to sharia laws, what happens to southern women living in Khartoum, Sudan's capital, or any other part of the north whose tribes and customs permit them to wear skirts and pants? For a woman to be prosecuted of indecent dressing all that's required is a single case filed against her. Some people argue that the government should make some policies and be lenient to Christians living on the north. Since thousands of cases are filed each year, there's a strain on the legal system and 'quicky' trials are made not taking into consideration the defendants' customs or religion.

The law also gives a lot of powers to police and judges to decide on what is appropriate dressing or not, human rights groups are trying so much to have this law overturned. It's unfortunate that women punished by this law don't speak about it or fight back since the laws create an environment that represses the whole society through women. This is a crime that carries a $100 fine and 40 lashings. For me this is a very harsh punishment for just wearing a pant or a skirt which may even cost way much cheaper in Sudan. While they are fined in the court rooms, they are publicly whipped by police.

The government spokesman says that the law is to protect the people not to punish women and there's an act controlling the behavior of men and women. Islamic law partially ruling Sudan emphasizes modest dress for women. Mrs. Hussein a female journalist was arrested and charged at a raid in a café in Khartoum for indecent dress, she claimed that women should be allowed to dress what they want. She pleaded guilty dared the authorities to punish her, she printed a lot invitations, sent emails asking people to come and witness her being punished.

To show her support thousands of women wearing pants turned up at the day of her trial protesting that the trial was unfair. The case was postponed twice, other women who were arrested with her and pleaded guilty were charged and lashed with plastic whips leaving permanent scars. This to me is 'cowardly behavior' because the government punished the other women because they were silent and couldn't fight for themselves.

That's only one mentioned case of the thousands filed, it's a good indication of the unity of the women of Khartoum when they came to show their support to Mrs. Hussein. In most cases women don't support each other making it difficult for them to achieve their rights, have a good representation politically or in economical development. Most of them still feel that they are inferior and should continue submitting even to the most oppressing laws.

How can one describe indecency? Although some form of dressing isn't appropriate when worn in the public, indecency is relative. What is indecent to me may not appear to be indecent to others. This depends with the place, function, type of job, climatic conditions, religion and culture. You cannot expect a lady on the beach or on a very hot day to be wearing a woolen sweater covering most of her body.