The Invisible Child Soldiers in Africa 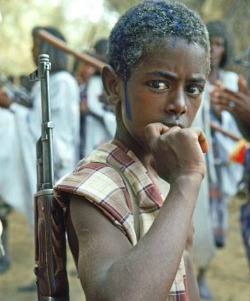 In 1986 in Uganda, Tito Okello, the president from the Acholi tribe and his National Resistance Army (NRA) were overthrown by the now incumbent president Yoweri Museveni in the Ugandan Bush War. The president's homeland, Acholiland in northern Uganda, has many guerilla groups with the widely popular Holy Spirit movement led by Alice Auma (Lakwena). However, the conflict in the north amongst themselves began after their relative loss (Tito Okello being overthrown).

Lord's Resistance Army (LRA), a guerilla group engaged in violent campaign to establish a government that is subject to or ruled by religious authority, has earned reputation for its activities in the north. It's leader, Joseph Kony, the son of a lay apostle father and an Anglican mother, and himself a former altar boy.

At teenage, he was the village witch doctor under his older brother Benon Okello. Originally the group was called United Holy Salvation Army (UHSA) but wasn't perceived as a threat by the NRA, with the addition of remnant troops from other groups and accords and the forced recruitment of children, UHSA became a formidable resistance army.

If the group's mission is to have a nation based on the Christian Bible and the Ten Commandments then why are they feared?

It has abducted over 104,000 boys and girls making them child soldiers from homes and schools turning them into ruthless killers. UHSA displaced over 1.6 million people and engaged in spirit wars. Kony kills the family members and neighbors of the children before forcing them to fight for him. He is thought to have been possessed by the spirits and even portrayed as either the messiah or the devil. He makes annual trips and ascends to the top of Ato hills in Uganda, there he lies down in the hot sun for days covered with a blanket of red termites that slash deeply into his skin. His body is spread with oil from yao plant then enter a cave and stay in seclusion for weeks. From the hills, he gives absurd directions to children that if they draw a cross on their chests with oil they would be protected from bullets, songs would slay their enemies, rocks would be turned to grenade and mortars while sticks would become swords. He insists that he and his army were fighting for the Ten Commandments.

In the late 1980's troops merged, the LRA started using standard military tactics as opposed to its previous attempts of attacking in cross-shaped formations and use of holy water. The new tactics proved successful. It gained more reputation and weakened other groups. By 1992, UHSA was renamed as United Democratic Christian Army, it was at this time that they would attack civilians alleged to be collaborating with NRA, and also kidnapped 44 girls from Sacred Heart and St. Mary's girls' secondary schools.

Lira, a town in Uganda, was one of those quiet towns in Africa and hardly made international news. Suddenly, it was making big headlines.  The news wasn't about what the people were doing but about what was being done to them by the LRA. By the name of their leader, Joseph Kony, the army raided villages, towns and camps of refuge turning them to camps of death and destruction.

The president, Yoweri Museveni, engaged Kony's army in a war. Kony's defence militia was helpless. The defence militia, a rag tag group of children that acquired weapons from Sudan, ran into line of fire believing that the bullets would do no harm since they believed in the mystical powers of their leader and were ordered not to take cover. On the other hand, Ugandan army (adults), well equipped, trained, with helicopters, tankers and trucks. The war left a lot of people(mostly children) dead.

Not just the children. Many of the displaced people who returned after the war, never returned to normal life.

The writer is a Kenyan volunteer and activist based in Nairobi, Kenya