The G8 Land grabs and Starvation in Africa 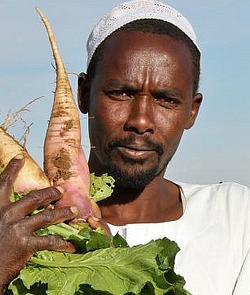 In reality however, Africa produces tons and tons of food. In fact, If all the tons of food Africa produces were to stay on the continent, nobody would go hungry in Africa. In fact, food would become cheaper for even the poorest of the poor and nobody would go hungry.The problem however is that, big companies ship all the food out to meet the luxury demands of the people of the west. One may ask, why would they ship food from "poor" Africa? The simple answer is that, the food produced in Africa are much greener and healthier than the food produced in the west.

The G8 nations (western countries) are promising more aid to Africa, the big companies are promising big money and more investment in Africa, and African governments are promising changes to the laws of their various countries to make it easier for big western companies to come invest. The truth however is that, these promises and actions are quite detrimental to the development of Africa. In other words, it is the average African that suffers from the consequences of these promises.

African governments are making changes to their laws enabling big western companies to come in. These big companies rush in and grab lands and begin intensive large scale production. Poor farmers are often pushed away from their farm lands to make way for these big companies. The poor farmers end up laborers working for these big companies. In other words, it is a power grab. The western companies now control the land, the seeds, the fertilizers, and food production in general. The sad truth however is that, these western companies are not in Africa to feed Africans but rather to make profit. At the end of the day, food is produced on a large scale in Africa at very cheap cost but then shipped abroad for more profit leaving Africans starving. Yes it is true these companies provide "jobs" but at the expense of our food system. It is even worse in other areas especially the mining sector. In the mining sector for example, farmers are pushed away from their farm lands while big western companies turn those agricultural lands into mining fields. So at the end of the day, the big western corporations and mining businesses profit hugely while the innocent poor farmers and their families starve in Africa.

The general impression given by the media that Africans are starving because of our location, poor climatic conditions, war, etc, is completely false in the sense that, Africa is perhaps the most fertile continent. In fact, our lands are the most productive and we are not as lazy as some people think. Africa produces more than enough food to feed the entire continent. Our only problem and the main reason why people continue to starve in Africa today is that, much of the food we produce in Africa, end up on some dinner plates in the west. He who controls the land and seeds, controls food production and also, security. Despite the fact that Africa produces so much food, most countries in Africa import much of their food from abroad at huge prices every single year. We get loans from the World Bank and the IMF and developmental aid in the form of money from the G8 nations but have to use all that money to import food from abroad at huge prices every year. At the end of the day, the money and aid return back to the G8 nations but we still owe them. It is a poverty trap.

To conclude, yes Africa is starving but not because there is no food in Africa (like the media often says) but because big western companies control our land, seeds and food production in general. Yes it is true African leaders are very corrupt and greedy but in most cases, they work under the instructions of the G8 governments and western corporations. African leaders who try to stand up for their people are often targeted and eliminated. At the end of the day, only the corrupt remain in power in Africa and they are all G8 puppets working under the instructions of western leaders and big western companies all to the detriment of Africa.