The Chocolate-covered Laborers of Africa 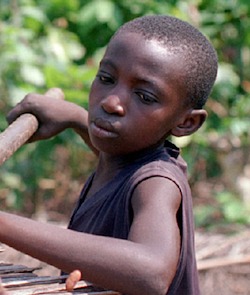 Almost everybody loves chocolate. Chocolate bars taste really good and there is nothing like a cup of hot chocolate on a cold winter morning. Whether Lindt, Mars, Hershey bars, M&Ms, Haribo, Ferrero, Mondelez, Perfetti, Meiji bars, Nestle chocolate bars, Groupo Bimbo chocolate bars, etc., one thing is certain; they all taste great. Babies and toddlers, pre-teens and teens, adults, parents, grandparents, teachers, doctors, bishops, lawyers, Imams, pastors, I can go on and on.

Almost everybody loves chocolate. Of course we all know where they are manufactured and we all know the name brands and how they taste but one question most of us fail to answer is; where does chocolate come from? Where is the genesis of chocolate? Where does our early morning cup of hot chocolate come from? Where do all those M&Ms and Hershey bars we love so dearly come from? The simple answer is Africa. Africa is the genesis of chocolate. Without Africa, chocolate would be “extinct”. In other words, whenever you go on your knees, please do remember Africa in your prayers and thank Africa for chocolate.

Although Africa produces almost all of the world’s cocoa, the entire continent of Africa only accounts for about 3 percent of its consumption. According to the International Cocoa Organization, Europeans account for nearly half of all the chocolate the world eats. The average Brit, Swiss or German will each eat around 11 kilograms (24 pounds) of chocolate a year. Although Asia is not traditionally chocolate, chocolate sales are booming in Asia today thanks to their booming economies. In other words, as Asian economies continue to grow, so is their demand for some chocolate. Chocolate consumption in Indonesia for example, has more than doubled in the last three years.

Why is it that Africa the leading producer of cocoa beans doesn’t get to enjoy chocolate like the rest of the world? The simple answer is that, not so many people can afford chocolate in Africa. The sad reality is that, the cocoa farming communities in Africa remain some of the poorest communities on the continent with most people living on less than $1.25 a day. Why is that so? Isn’t cocoa a cash crop? Yes cocoa is a cash crop and there are billions of dollars flowing in the chocolate industry. The truth however is that, the world pays “peanuts” for Africa’s cocoa.

In other words, the world gets Africa’s cocoa almost for free. The world determines the market price of Africa’s cocoa and pays whatever price it deems fit. Africa produces more than 75% of the world's Cocoa but gets just around 2% of the over $100 billion revenue from the chocolate industry and that explains why the cocoa farming communities in Africa today, continue to wallow in absolute poverty.

According to the International Labor Organization (a UN agency), of the estimated 218 million child laborers in the world, about 70% work in agriculture. There are millions of child laborers in Africa today and it is worse in the cocoa farming communities across the continent. Millions of children continue to toil all day and night in cocoa plantations. Children of school-going age are out of school in Africa because of the poverty and it is worse in the cocoa-farming communities. Most of these children end up following their parents and relatives to farm because the parents cannot even afford to pay their children’s school fees.

In other words, there is a huge chance that the chocolate bar you love so much came from some poor community in Africa and that, some poor kids had to toil all day and night just to get it for you. So next time you go on your knees, please remember the chocolate-covered child laborers of Africa.