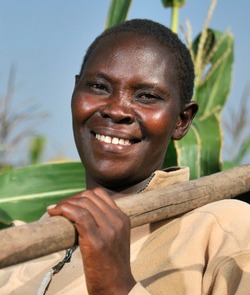 Fertile fields, thriving crops, high quality and plentiful yields, healthy and numerous cattle, financial security, good education for the children, a better home, a better life for all. The African land can provide all these and much more to the hardworking smallholder African farmer, the large scale African farmer, entire countries, Africa as a continent, and even the world at large.The potential is phenomenal. Unfortunately however, this potential remains largely untapped.

Farming is a noble and vital profession because without farming, the world would starve to death. Unfortunately, despite this huge role farmers play in our lives, most farmers across the globe continue to face great challenges in their daily lives.

Most farmers in Africa today are smallholder or subsistence farmers who grow crops and rear animals just to feed themselves and their families. Also, the majority lives in rural and suburban communities.

LACK OF INFORMATION: Lack of information remains number one problem facing most small scale farmers in Africa today. Most miss out on new and improved methods of farming. Some, especially those in the remote areas, have no access to information at all (not even radio sets). Even those in the sub-urban areas with some limited access to information, lack what it takes to process the information they receive. Most miss out on proper information regarding cheap but effective farming practices such as crop rotation, the use of green manure, etc, to fertize the land. The main problem here is illiteracy. Even in cases where there is some access to information, most poor farmers are unable to discern due to illiteracy. Illiteracy is very high in rural Africa. Programs like adult education can go a long way in helping the poor farmers in rural Africa.

POOR FINANCIAL SUPPORT: Lack of financial support systems to enable farmers grow, expand, and maintain their yields. Although there are several Micro finance groups operating in Africa today, not so many farmers have access to these groups and not so many farmers even know how these groups operate and how such groups can help them in the long run. Most farmers in Africa are poor financially making it almost impossible for them to adopt new farming practices. For example, research has shown some seeds yield better and are more tolerant and disease resistant than others. However, such seeds are often sold at higher prices on the market than regular seeds and not so many farmers can afford them. Once again, proper education and government assistance can go a long way here.

LACK OF ACCESS TO FERTILIZERS: This falls under the poor financial system mentioned above. Because agricultural lands have become so expensive in Africa, most poor farmers have no choice than to farm on same pieces of land over and over again. Farming on same pieces of land for years leads to land degradation whereby fertile lands loose most of their nutrients and become unproductive or barren. Farmers therefore depend mostly on artificial fertilizers to enable them grow crops and improve their yields. Artificial fertilizers are quite expensive in Africa and in most rural areas, they are unavailable at all. Some government assistance such as giving farming subsidies to small and large scale farmers, giving some tax breaks, etc., can go a long way here.

POOR TRANSPORTATION: This is a major issue facing not just agriculture but the economy in general throughout Africa. Most of the farm produce in Africa just go waste in the remote areas and it is mostly because, farmers find it very difficult transporting their farm produce to the market to sell. The roads don't exist and most remote areas find themselves cut-off from the rest of the world. Because there are no proper storage facilities in the rural areas, most perishable goods such as tomatoes, onions, leafy vegetables, etc., just rot away in the remote areas.

POOR MARKETS: Market for farmers has become one of the biggest issues for Africa today affecting the lives and living standards of millions of people. But how do we create markets and how do we make them sustainable and more importantly, how do we make them grow? Farmers in places like Zambia love one crop above all others - Maize. Everyone in Africa eats it and therefore everyone grows it. However, the sad thing is that, not everyone is able to sell it. Lack of market facilities and poor government regulations, etc., make it almost impossible for farmers, especially small-scale farmers, to market their farm produce. Improved market facilities and good goverment regulations can go a long way in helping poor farmers market and profit from their harvests.

John Peter 3 years 11 months
Your good knowledge and kindness in playing with all the pieces were very useful. I don’t know what I would have done if I had not encountered such a step like this. Agriculture management solution.

Zoe Ragswater 3 years 4 months
This is very helpful for my class project this site is awesome! ☺

HENRY ATOBI 3 years 4 months
Very great write-up. It has been very helpful to me. Thank you and keep the good work to the optimum.

Ababio Edmund 3 years 3 months
It had been so helpful to me. It just that the points are few.

Latika 3 years 3 months
Thanks. this helped me a lot in my school project

Belva 3 years 2 months
Thanks. It has been helpful to me in my gce exams, but I want more so that I should understand everything well and all steps.

Yahaya sherrif 2 years 6 months
Just the way I want it, highlighted and explained, easy to understand and defend the facts written down

Stephen Kilonzo Mbatha 4 months 15 days
I appreciate the fact that this content is very useful not only to us but future generation more so in academics. Good work, keep it up.