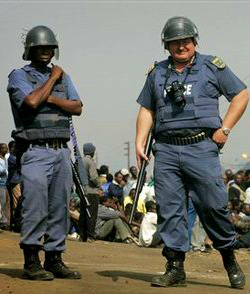 In South Africa today, butchers are above the law and they have the right to butcher not just goats and cows but also innocent human beings. The South African policemen and women in uniforms today are the butchers of life. In other parts of the world, "Police are friends". However, in South Africa, the policeman is your worst enemy.

In other words, South Africa the home of Nelson Mandela the father of peace is also a country full of criminals and it may surprise you to know that most of the criminals in South Africa today are in uniforms. The easiest way to get away with crimes in South Africa is to join the police force and so it is.

This may sound so weird and absurd to some of you but that is the truth and this is the situation in South Africa today. The policemen and women of the law enforcement branch of government continue to shoot and kill innocent people all day and night and most of these cases go unnoticed why because the police force buries such cases so as to keep their so-called gorgeous reputation.

Just a few days ago an innocent taxi driver was tied to the back of a police van and dragged to death in broad day light by some South African policemen in uniforms. Somewhere in August last year, more than 34 innocent miners were bullet-sprayed to death by some South African policemen and women in uniforms. Although some of these stories are so disturbing to even read, these stories and many more are just everyday stories in South Africa today.

Jay Contreras 4 years 3 months
Sounds just like the US. The most criminally insane reprobates are more than likely to gravitate towards 'law enforcement'. And another similarity: the US and S. Africa, along with Apartheid Israel, all operate under state-sponsored & organized brutal and terrorist tactics to keep the designated 'kaffir/nigger/palestinian' in line. I'm sure the same can be said of that other penal colony, Australia in relation to the aborigines.