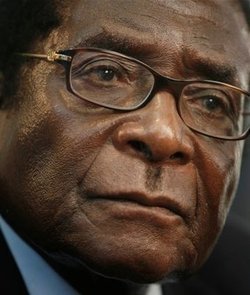 It is often a sad situation to witness when people try to compare failures like Robert Mugabe to great men like Nelson Mandela.Those who don't know much about Africa think Robert is a hero simply because he (Robert Mugabe) is both anti-white and anti-west forgetting the fact that, only fools and cowards hide under the dark shadows of racism, tribalism and ethnocentrism, extreme nationalism, etc. Robert Mugabe thinks the west is the enemy and so he (Robert Mugabe) does not want to have anything to do with the west. The truth however is that, the enemy is within. In fact, we are our own worst enemy.

Has Robert Mugabe been able to improve Zimbabwe his "beloved" country?  The answer is NO. Has Robert Mugabe been able to do something great to better the lives of his poor countrymen after nearly 4 decades in power? The answer once again is a very big NO. Zimbabwe is now among the poorest (bottom 5 according to a recent UN multi-dimensional poverty index.) countries in Africa if not the poorest of them all. Does this make a leader a hero?

Tamar Taylor 4 years 4 months
Did you forget to mention that those great white farmers as you describe them, stole the land they farmed from Black Africans who owned the land first, facilitated by Kenneth Rhodes? Have you forgotten how the 2 Rhodesias came about? What about those same farmers made to work as indentures on the land their fathers had possessed for 1000 years before? I read your full discourse above and I must ask you these questions.