Regional Integration: Why Africa must integrate 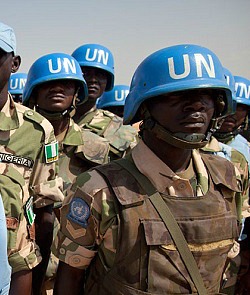 It is larger markets that enable economies to grow and larger markets generally depend on regional integration. In other words, if you don’t integrate, you fragment your markets leaving your economy at the mercy of external forces. One way western countries control poor third world countries in Africa is by controlling the markets of those poor countries. Once the markets of a country are controlled by an external force, it is almost impossible for that country to gain economic freedom and that is the problem facing most poor third world countries in the world today.

Our markets are fragmented and we are caught in a trade-trap making it almost impossible for our economies to grow at the rates they should be.

So what exactly is regional integration?

Regional integration in this particular context is simply a number of countries coming together and joining hands around a particular program. This could be trade expansion (or creating larger markets by reducing transaction costs), infrastructure, managing common resources, Security, education, etc.

Managing common resources is quite obvious. Take Lake Victoria for example. With a surface area of 68,800 square kilometers (26,600 sq mi), Lake Victoria is Africa's largest lake by area, and is also the largest tropical lake in the world. Lake Victoria is a trans-national resource bordered by Kenya, Tanzania and Uganda. This lake is the source of the White Nile and provides an income for millions of residents along its shores. Lake Victoria draws in millions of tourists, bird watchers, fishermen, etc. from all around the world. Since Lake Victoria is a trans-national resource, one country cannot manage the affairs of the lake all by itself. Rather, Kenya, Tanzania, and Uganda can come together and integrate their plans and policies concerning the Lake.

So the question now becomes; is Africa integrating? The answer to this question is yes and no. Yes because Africa is literally integrating. The East African Community or EAC is an example of regional integration in Africa today. The East African Community or EAC is the regional intergovernmental organization of the Republics of Burundi, Kenya, Rwanda, The United Republic of Tanzania and the Republic of Uganda with its headquarters in Arusha, Tanzania.  The South African Development Community or SADC is another example. Currently SADC has a membership of 15 Member States, namely; Angola, Botswana, Democratic Republic of Congo (DRC), Lesotho, Madagascar, Malawi, Mauritius, Mozambique, Namibia, Seychelles, South Africa, Swaziland, United Republic of Tanzania, Zambia and Zimbabwe. West Africa also has The Economic Community of West African States or ECOWAS which is a regional group of fifteen countries, founded in 1975. Its mission is to promote economic integration in "all fields of economic activity, particularly industry, transport, telecommunications, energy, agriculture, natural resources, commerce, monetary and financial questions, social and cultural matters. In other words, Africa is literally integrating.

Factors such as geographical proximity, homogeneity factors (like common languages, culture and religion), etc. all seem to influence the rate of integration in Africa today in one way or the other. For example, Burundi was brought into the EAC because of its proximity and for security reasons. Leaving Burundi out could serve as external destabilizing factor.

On the other hand, the answer to the question above is No. Why? Because Africa is not integrating at the rate it should be and even in the areas where there appears to be some integration, those integrations exist only on paper and not in real life. In other words, those bodies of regional integration barely function. Even the African Union or the AU which is the mother of all these regional bodies in Africa today, barely functions.

Perhaps the number one problem hindering integration in Africa is the idea of “Sovereignty”. Most countries in Africa do not see the need to sacrifice some “sovereignty” for the greater good. In other words, they want to be able to take care of their own affairs and make their own decisions. In reality however, regional integration in this case even protects the sovereignty of member states especially from higher forces.

So the question now is; how can Africa overcome all these challenges and integrate?

Yes there is the need for Africa to integrate. However, for Africa to integrate there is also the need for a political will. Normally, it is the leaders who drive regional integrations. However, with leaders like José Eduardo dos Santos of Angola and Jakaya Kikwete of Tanzania, it is almost impossible to integrate. For example, Dos Santos of Angola feels Angola is doing great on its own and that there is no need for Angola to be in SADC making Angola a “stalling” factor in SADC decisions. The same can be said about Jakaya Kikwete and the EAC. These leaders barely think beyond their borders.

For Africa to integrate and prosper, there is a need for leaders with the political will. For Africa to develop, we need leaders who think beyond their borders and also outside the box.