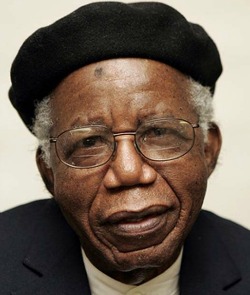 Professor Chinua Achebe was a man of many voices. Hated by the government but loved by the people. Professor Chinua Achebe was the people's voice who spoke nothing but the truth. He carried the voice of the people not just through his voice but also through his writings. When things began to fall apart, he was always more than ready to voice out on behalf of the people. Even when he discovered those things fallen apart already, he did not keep quiet. Instead, he was more than ready to pinpoint the root causes and solutions to those problems.

Just like they did to the "Tree lady" of Africa, the government of Nigeria hated the beloved professor for this but that did not stop Professor Achebe from speaking the truth. Professor Chinua Achebe was a novelist, a poet, and a critic who feared nothing and so spoke nothing but the truth.

Professor Chinua Achebe was born on November 16, 1930 in the Igbo town of Ogidi, Anambra state, South-eastern Nigeria and passed away on March 21 2013 in Boston at age 82, almost exactly 23 years to the day a car accident in Nigeria left him paralyzed from the waist down. The devastating accident was the beginning of professor's "exile". Professor Achebe's devastating accident happened in Awka (the capital of the Anambra State government), in south-eastern Nigeria, not very far from his birthplace. Nigeria's hospitals could not take care of him, and soon after he had to be moved to a hospital in England, where he was told he would never be able to walk again.

Professor Chinua Achebe was a man of honor never bought by money nor fame. In 2004, the then corrupt government of Nigeria chose to offer him a national honor. Not surprisingly, Achebe rejected it. In response the Government described his decision as "regrettable." Seven years later, another corrupt government tried again. Again, Achebe said no, arguing that "the reasons for rejecting the offer when it was first made have not been addressed let alone solved. It is inappropriate to offer it again to me." Professor's reason was quite simple. Fix Nigeria first.

Although professor may be gone, he is still alive and lives in our hearts and minds and his legacy lives on.