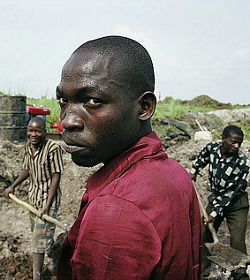 Positive attitude to conquer youth problems? I once asked an adult; a retired educator of the English language, 'what will it take for me to overcome the problems am experiencing as a youth and those am yet to experience without being overwhelmed by them?'

His response was plain, 'choose the best attitude in all you do. Habit will make it pleasant for you to handle your problems. A build up on Pythograth (a 6th century B.C mathematician and philosopher.) philosophy.

Startled, I wondered how mental activity could materialize into solutions; could a good attitude give jobs, capture drug addiction? Would it really materialize to conquer the numerous woes?

I thought the old man mentally senile actually, for I needed practical advise like taking to the street when unemployed, burying worry in Dutch courage, that is , drinking my head away,... you know what I mean. In my expedition, I came across literature from one doctor, author and encyclopedist George .D. Pamplona.Roger, who equally stated that a mental equilibrium is a paramount factor of health, riding oneself of worry , grudges against others, or even oneself, confidence and a sempiternal smile in facing life's struggles brings optimism and patience for the toiling. According to a scientific analysis, it was discovered that cancer affects more often the depressed or the ill humored. Did this mean that the ill humored are more prone to being overcome by youth problems?

He asserts that gaining an inner peace while plunged in the cataclysm of the many tensions is not an easy task, but can be attained in means like faith. The church indeed has a role to play, in the gospels, the inspiration from readings, one often gets consoled. In private meditations, self evaluation and examination, a youth is able to know their capabilities, fears and weaknesses, and like the philosophy goes, knowing and accepting a problem is a big leap to solving it.

This awareness and belief play a significant role, therefore, in quenching the heat of our agitated feelings, resulting from unemployment, addiction, frustration, anger, and other problems we suffer as youths. When one lives in firm confidence, hope and belief that they are victors, they persevere, and it is crowned by a conviction that there is someone above them who understands their atrocities and loves them. David Padfield sums up all the youth problems as "the lust of the flesh, the lust of the eyes, and the pride of life" (1 John 2:16). That the problems are the same as in ages ago and so are the solutions, only that they some wrapped up a little differently.

Indeed a good mental disposition and peace of spirit enables one face the battles of youth as they all seem to be mentally borne. According to 'The Power of Positive Attitude' by Remez Sasson, he states, 'Positive attitude helps to cope more easily with the daily affairs of life. It brings optimism into your life, and makes it easier to avoid worry and negative thinking. If you adopt it as a way of life, it will bring constructive changes into your life, and makes them happier, brighter and more successful. With a positive attitude you see the bright side of life, become optimistic and expect the best to happen. It is certainly a state of mind that is well worth developing and strengthening.'

With this enlightenment, I realized that the old man was sane and I was the mentally incompetent one, because many different people could not agree on the same wrong philosophy, if it were wrong anyway. With this, we would chose friends, not for stupid reasons like cheap popularity in belonging to a gang, but in modesty in order to mutually help one another develop.

Sometimes teenagers allow the people of the world to determine how they will dress. But a positive attitude will still avert the problems of adultery by desire for one in immodest apparel as many will have modesty in dress.

Mates , young newly weds will develop character hence remember their wedding vows , love, honor and cherish their spouses, even in the most trying of circumstances of life, it would curb the problem of fear to marry, divorce or sexual immorality for the older youth already married. It yields obedience to parents, respect for authority, listening and seeking advice from parents. It could establish a communication that could avoid the occasion of collision with parent.

I was further advised to seek particular advice in order to be knowledgeable enough in making decisions, especially in the confusion of career choice. The role I was charged with was that of creating a self that I would be proud of later, and not to solely be what others want me to be. That meditation could lead to discovery of talents that I could use to develop not only myself, but also others around me. With that, i realised that indeed our education, despite its relevance, had clipped the feathers of our creativity to the extent that we became too theoretically learned to apply the education that we spent half our lives pursuing.

I had spent so much time in the blame game, branding many bother people, things, situations, name it, for whichever shortcoming I encountered in my life. This negative tendency bogged down my incentive to fight my own battles, taking whatever failure as a blessing in disguise was never a part of me. But now I know that it is my role to change my attitude and socket for progress.

'A positive attitude leads to happiness and success and can change your whole life. If you look at the bright side of life, your whole life becomes filled with light. This light affects not only you and the way you look at the world, but also your whole environment and the people around you. If it is strong enough, it becomes contagious.' That is the theme I follow today,

If you have been the negative type being followed by a multitude of woes, be not retrogressive like I was to the old educator. It is time to get rid of negative thoughts and behavior and lead a happy and successful life. If you have tried and failed, it only means that you have only not tried enough, but are better than many who have the ability, but have not the will to harness the resources endowed Uganda for their own engrandisation. They keep the paradox of poverty in plenty a recurring factor in a nation like Uganda.

Other article(s) by this author: The choices in life and self discovery