Mugabe and Gaddafi: Why Mugabe must Go 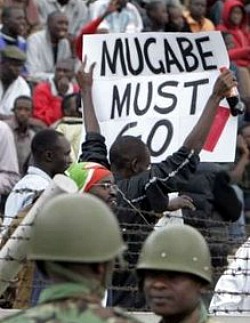 Those outside Africa sometimes make-up stories and pretend as if they know all about Africa knowing very well they know very little to almost nothing about the continent Africa. You cannot know Africa more than Africans. We are Africans and we know Africa because Africa is our home. We know Africa and Africa knows us so when we say something about Africa, you must give ears to our voices because we know what we are talking about better than you think you do.

Gaddafi was a bad guy because he considered his voice that of a supreme being in the sense that, only his voice counted in Libya. Those very close to him especially his sons had the freedom to do whatever pleased them. Gaddafi's sons and ministers even had the right to kill whereas those far away from him had very little to no freedom at all.

Now let's take a look at Mugabe and why Mugabe must go now. Both Gaddafi and Mugabe have done similar bad things which make them both bad guys. They were both freedom fighters who turned into selfish "supreme beings". In the case of Gaddafi, at least Libyans had homes to sleep in and food to eat. Libyans only problem was the lack of freedom and self-expression and also oppression from Gaddafi's immediate people. In the case of Mugabe however, Zimbabweans are not only being oppressed. Zimbabweans are not only suffering from "freedom of speech" and self-expression. Zimbabweans are also suffering from extreme poverty and hunger most with no place even to lay their troubled heads. Zimbabwe which used to be one of the most promising countries in Africa is now amongst the poorest countries on earth and all thanks to the self-made "messiah" Robert Mugabe.

Robert Mugabe's real age is around 92 although his official age says 87. Mugabe has been in office for more than 3 decades now and throughout these several years, Zimbabwe has seen nothing but the worse. Considering the tension building in Zimbabwe right now and considering Mugabe's own health conditions, I think any sensible person at all who loves his country and cherishes peace would step down peacefully if not for anything all, to allow the development of democracy once again. However, Robert Mugabe says No. Robert Mugabe wants to rule Zimbabwe even in death.

Mugabe now is like a yellow leaf hanging on a branch of a tree ready to fall why because once leafs turn yellow, they don't stay long on the tree. That is how nature works and there is nothing we can do about it. The yellow leaf may either fall on its own or be blown away by the wind. If you fall on your own, at least you stay very close to your roots. However, if you wait to be blown away by the wind, you may not like where you land and that is why I think it would make perfect sense for Mugabe to step down now and hand over power peacefully now that he is alive. That would greatly help in the development of democracy and peace in Zimbabwe again.