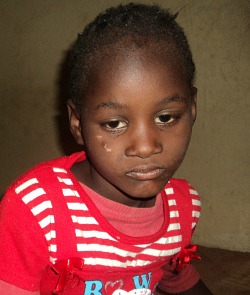 It is very sad that almost nobody talks about this issue. In fact, it is a big shame on all of humanity. It is modern-day slavery and it is happening in Africa and other corners of the world.

Not long ago, the barbaric conditions of migrants in Libya were brought to light and the world was shocked at the horrific conditions migrants go through in Libya. Libya wasn't always this bad. Things got to this barbaric level after the fall of Muammar Gaddafi. However, it may surprise you to know that there exists a country in Africa where slavery is a normal part of everyday life. In the Islamic country of Mauritania in Africa, slavery is "normal" and perfectly “OK” according to their constitution and it has been like that for centuries.

The Islamic Republic of Mauritania (a country in the Maghreb region of North Africa) is slavery’s last stronghold. Their Islamic belief permits it and the constitution upholds it and nobody dares go against the “norms” in Mauritania. There is no black “citizen” in Mauritania. Even former slaves who have been able to buy their freedom from their masters are just considered “free” but never recognized as citizens. Yes the indigenous Blacks of Mauritania are not constitutionally recognized as citizens. It is illegal to speak against slavery in Mauritania and no citizen dares go against the constitution. Slavery is deeply rooted in the Islamic culture of Mauritania and the roots are so deep that, most citizens feel their country cannot survive without slavery. Even the president and his cabinet own slaves. Slaves are passed on from generations to generations. Sons inherit slaves from their fathers and mothers pass on their slaves to their daughters and so the tradition of owning slaves continues.

Journalists who try to document the slavery in Mauritania often end up in jail and any citizen caught speaking against slavery publicly in Mauritania is put behind bars. The black people of Mauritania are considered nothing but “properties” rightfully given to their owners by a peace-loving God called Allah and his holy prophet. Although the indigenous black populations of Mauritania were the first people to settle on the land, the majority of the black populations living in Mauritania today are products of the Trans-Saharan slave trade that took place in Africa centuries ago. Several villages and small towns were raided by some Arab/Muslim raiders and traders from North Africa and the Middle East. Several villages and small towns were set ablaze and several innocent people including women and children were put in chains and dragged across the Sahara desert to North Africa and the Middle East. That was the beginning of the slavery in Mauritania today. The wealthy Arabs/Muslims and people from rich families purchased several slaves and kept as their properties. The Lighter-skinned Berber people who speak Arabic, have traditionally owned slaves in Mauritania. Most men wear light blue shirts called boubous, which have ornate designs on the chest. White Moors are the power class in Mauritania and control more wealth than any other group. Some, however, live in poverty. It's not uncommon to find a White Moor living in a tent only slightly larger than that of his or her slaves.

Slaves do not own properties in Mauritania and slaves do not “earn” income. In other words, slaves just work for their masters. Some slave owners send their slaves out in the day to go work as laborers for other people and return all their earnings to their masters at the end of the day. The Mauritanian law helps slave masters easily recapture their slaves. It is a great crime for a slave to run away and the punishment could be quite deadly. Children born into slavery automatically become slaves and properties of their masters and several slave owners inter-breed their slaves in order to expand their “inheritance”.  The ruling-class in Mauritania often tells reporters that slavery in Mauritania was officially abolished in 2007 but that is a big lie. Slavery is much alive in Mauritania today as it did centuries ago. According to a recent CNN report, an estimated 10% to 20% of the Mauritanian population lives in slavery.

The sad part is that, most slaves in Mauritania today are so brainwashed to the point where they (the slaves) themselves have come to accept their fate as the “norm”. The first step to freedom is realizing the fact that one is a slave. However, in the case of Mauritania, most slaves don’t even consider themselves slaves. Most slaves consider it a great sin (against Allah) for a slave to disobey his or her master. Despite the harsh treatments they undergo, most slaves speak no evil of their masters in Mauritania and it is very difficult to find a slave more willing to share his or her story. The “faithful servants” who endure to the end are often “handsomely” rewarded with “wives” and “husbands” to produce children (child slaves) for their masters. This is the story from Africa and this is the story from Mauritania. It is a story of life and death. It is a story of injustice to humanity. It is a story buried by Mauritania’s endless sea of sand dunes.