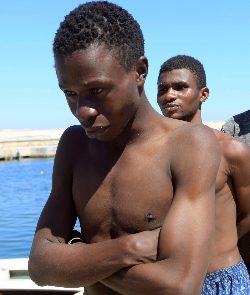 They are often kidnapped, tortured, raped, and auctioned like stolen goods on underground slave markets sometimes for as little as $100. It is a dream of a better life turned into a living hell on the shores of the Mediterranean. The life of an African migrant is worth less than that of a dog in Europe. It is a never-ending story of desperation, deceit, torture and murder. The desert is full of dried bones and the Mediterranean is full of nothing but floating dead bodies of African Migrants. The saddest part is that, the international community doesn’t seem to have any idea of what is actually going on in Libya today. And so the horror continues.

It is a modern-day slave trade and Libya is gradually turning into the biggest slave market in the world. Slavery in Libya is gaining deeper roots than even the centuries old slavery in Mauritanian thanks to the illegal migration of tens of thousands across vast deserts and the unforgiving Mediterranean into Europe.  It is the most dangerous migrant journey in the world and this year, Libya has become the major departure point for migrants crossing into Europe, fueled in part by the economic and social instability America and NATO created and left unsolved in Libya not long ago.

It is estimated about 3000 make it across the Mediterranean to Italy every week and at least 20 die trying every day. As risky and dangerous as it sounds, crossing the Mediterranean to Italy isn’t even the deadliest part of the journey. Before migrants reach the coast, they have to cross more than 1000 miles of desert, a journey even deadlier than riding in rubber boats on the sea. This is the untold story of the tens and perhaps hundreds of thousands of migrants stranded in Libya (and on the Mediterranean) today.

Libyans don’t want them in Libya and Europe doesn’t want them to come to Europe. In fact, even their own countries have given up on them. It is a hopeless situation for the majority of Migrants who risk everything just for a chance of a better life for themselves and their families. Although unfortunate, many are ready to take this risk.

Someone may ask; what is Libya’s government doing about this horrific situation? Before we continue, let’s take a look at some of the factors at play in Libya today. Tripoli the capital of Libya is without a doubt, one of the most dangerous cities in the world today. There is a new government but the real power lies in the hands of the armed militias and there are over 40 armed militias in Tripoli alone. In other words, although there is a constitutional government, armed militias and terrorist organizations are in control of Libya today. These armed militias and terrorist organizations fund their operations through kidnappings, human trafficking and slave trade, smuggling of dangerous goods and chemicals, and sometimes with a little help from NATO, America, and the EU.

So how do America, NATO and the EU come into all this? Well, first of all, ever since the Libyan revolution of 2011 which led to the ouster and death of Muammar Gaddafi, Libya has known no peace. It was America and NATO’s intervention that led to the fall of Muammar Gaddafi. America under the banner of NATO bombed Libya and sponsored some rebel groups to overthrow Gaddafi. Those rebel groups America and NATO gave training, guns and other ammunitions to, are the “source” of the numerous armed militia and terrorist groups operating in Libya today.

With the war against ISIS along the coast, over 40 militia groups vying for control of the city (Tripoli), an economy in free fall, and daily black out, tackling the migrant crises is not a priority. Neither the internationally recognized Tobruk-based Libyan government nor the self-appointed Tripoli-based government (the National Salvation Government) has any official process in place to deal with migrants in Libya besides the numerous cramped up makeshift detention centers. Because of the level of violence, the kidnappings and the lack of government initiatives, aid agencies are not able to operate with any success in Libya today.

Also, Migrants are at risk of kidnappings and enslavement sometimes by government forces. In fact, the United Nations said in a June report that the Libyan Coast Guard and the department to counter illegal migration in Libya are both “directly involved in slavery”, an assessment backed by an elite EU report. Someone may ask; what role does the EU play in all this? Well, no EU member country can escape responsibilities here and the reason is because, the same Coast Guard that is involved in the slavery in Libya, receives training and funding from both the EU and NATO.

Also, the reason why migrants are at risk in the first place is because the EU is trying to severely cut back on African migration and one way they are doing that is by empowering often violent local forces. Italy for example, continues to sponsor several armed militia groups and doesn’t seem to care about what happens to migrants on the Mediterranean.

Philista Onyango 4 years 4 months
The UN leadership should not be mourning when CNN shows some Africans being sold as modern slaves in Libya. What the UN leadership should be concerned about is why these Africans are leaving their countries. After all, many of these countries are member States of the UN. It is sad that the leadership of UN is just realizing that human trafficking is taking place in Africa. Many Africans have died in the Mediterranean Sea as they run away from cruelty of their leaders and/or poverty. There are many children in Africa out of school and sub-Saharan leads with the numbers. These children are working in the most horrible conditions both within and outside Africa. Children are on streets, everywhere. So, what the CNN has reported is a tip of the iceberg.

The UN leadership should hold these African countries (where leaders enjoy comfort at the expense of the populations they lead) accountable, since many, are member states of the UN. The UN should pay attention to the source and the reasons behind the migration of these Africans. Above all, the transformation taking place in Zimbabwe should be highlighted and appreciated to enable other countries go through such processes, without shedding blood as often is the norm.