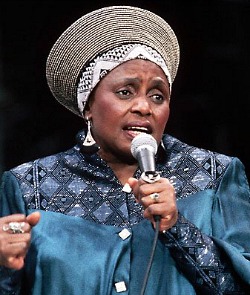 She was born to do what she loved doing, and although she was born into poverty, managed to accomplish all her dreams through hard work and dedication. She wasn't born with silver spoon in her mouth yet died leaving treasure boxes of gold and silver in the hearts and souls of several people around the world.

She was banned from the land of her birth but that did not stop her. Why? Because, the entire world became her homeland.

"I always wanted to leave home. I never knew they were going to stop me from coming back. Maybe, if I knew, I never would have left. It is kind of painful to be away from everything that you've ever known. Nobody will know the pain of exile until you are in exile. No matter where you go, there are times when people show you kindness and love, and there are times when they make you know that you are with them but not of them. That's when it hurts".

Miriam Makeba spent her early days as an infant in jail for a crime she knew nothing about. Miriam had to spent the first 6 months of her life in jail. Why? Because, her beloved mother, Nomi Christina Jele (a herbalist /traditional healer), was caught selling umqombothi (a homemade African beer brewed from malt and cornmeal) and was sentenced to jail just 2 weeks after poor Miriam was born. Miriam Makeba's father, Caswell Mpambane Makeba, a Xhosa working-class man, passed away when Miriam was just 6 years old. Christina continued to labor even harder so as to cater for young Miriam and her 5 siblings. We call her "Mama Africa" because, to many of us back home and abroad, she was a great queen. We call her Mama Africa because she had the voice of the mother sunbird.

Miriam Makeba wasn't just a great singer, she was also a freedom fighter and a major peace figure who spoke against injustice wherever and whenever possible. Because of her fighting spirit and outspokenness, the then Apartheid South African government, cancelled Miriam Makeba's passport to prevent her from returning to South Africa her homeland from her overseas travels in 1960. Miriam Makeba was able to return home after the release of Nelson Mandela in 1990.

The life of Miriam Makeba was full of so many obstacles but Miriam did not give up. She moved on from greatness to greatness until she passed away in 2008 at the age of 76. May her soul rest in perfect peace.