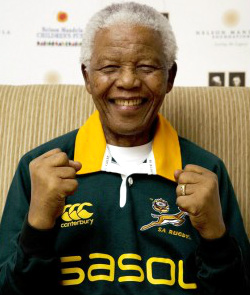 Nelson Mandela will be 95 years old come next month. With age comes experience but with old age comes both experience and problems with our mortal bodies. Old age is catching up on the great Madiba and there is no doubt his strength continues to fail him quite often these days. Mandela spent a fifth straight day Wednesday (06/12/13) in a Pretoria hospital where he was visited by one of his daughters and two granddaughters.

A recurring lung infection following several respiratory diseases (including tuberculosis) which he suffered during his three decades in jail as a prisoner, continues to threaten the great Madiba. Mandela is a fighter and he surely knows how to win freedom battles. The great Madiba never gives up until it is done.

Mandela has been going to the hospital quite often these days due to a recurring lung infection but through all these recurring problems, the great Madiba always comes out smiling.

Nelson Mandela is still in hospital after 21 (updated) straight days of intensive prayers across Africa. Although some especially those in the outside world are beginning to give up, Africans continue to pray for the great Madiba why because we Africans need Mandela more than ever. He represents our hopes and aspirations and above all, he represents truth and Justice.He is the greatest African alive today and one of the greatest leaders of all time and that is why we just cannot let him go.

I read a post online recently that shocked me quite deeply. The leader of the British National Party Nick Griffin openly made it known to his supporters on twitter why he continues to pray for Nelson Mandela to die. According to Nick Griffin, Mandela is a terrorist and deserves nothing but death.

I got very angry just after reading that horrible post. I was shocked to read that such a horrible idiot could be a chairman of a National party. So I decided to google more about this guy Nick Griffin and after reading several comments online, all my anger disappeared. I came to know that Nick Griffin is nothing but a public cartoon and the biggest fool alive and that, this wasn't his only stupid post. In fact, according to some respectful sources, nothing good comes out of Nick Griffin and it makes no sense however to take anything he says serious and that explains why my anger disappeared all of a sudden.

"We are very happy with the progress that he is now making following a difficult last few days. We appreciate the messages of support from all over the world." Jacob Zuma (the president of South Africa).

"President Jacob Zuma, accompanied by ANC Deputy President, Mr Cyril Ramaphosa, visited the former President this evening, 23 June in hospital. They were briefed by the medical team who informed them that the former President's condition had become critical over the past 24 hours." the report said.

A day earlier, the anti-apartheid icon's grandson Mandla Mandela, said his grandfather was getting better and was expected to be discharged from hospital soon.

The good news however is that, Nelson Mandela is still alive. With prayers all things are possible. Lets continue to pray for our beloved Madiba. It is too early to let him go.

UPDATE (6/29/2013): Mandela has been in hospital for about 3 weeks now but the good news is that, there is "Great Improvement" in Nelson Mandela's health according to Winnie Mandela (Nelson Mandela's ex-wife). The situation got quite scary just a couple of days ago but thank God there's been some improvement. It is still "critical" but "stable".