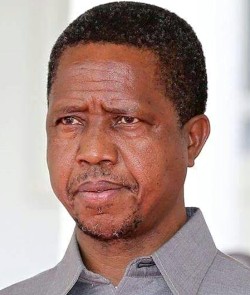 The Republic of Zambia (or "Zambia" for short) is a landlocked country situated on a high plateau at the crossroads of Central, Sourthern and Eastern Africa. The name "Zambia" comes from the Zambezi river which drains all but is a small northern section of the country. The Zambezi river is located at about 1079 feet above sea level and is Zambia's lowest point.

One of the seven natural wonders of the world, Victoria Falls, is located at the border between Zambia and Zimbabwe.

The Republic of Zambia has a total land area of about 752,618 squared kilometers (with about 9220sq km covered by water). Just about 5.1% of Zambia's total land area remains arable (land good for farming).

The Republic of Zambia just like its neighboring countries is blessed with abundance of natural resources such as gold, silver, copper, uranium, hydropower, zinc, cobalt, coal, lead, etc.

However, despite the abundance of natural resources and the high literacy rate, about 64% of the total population of Zambia lives below the international poverty line. Despite the high literacy rate, quality education is very hard to come by in Zambia today. In other words, people graduate from school with degrees and certificates but unable to apply the knowledge to better themselves and their communities. This is a major problem in almost all African countries. Extreme poverty and hunger remain a top issue in Zambia today. Poverty, especially in rural areas is driving many children of school-going age out of school. Most of these school droupouts end up on the streets of major cities and towns hawking, stealing, prostituting, etc.

The Republic of Zambia remains one of the top 10 HIV/AIDS killing zones in Africa today with HIV/AIDS adult prevalence rate of about 13.5%. More than 980,000 people were living with HIV/AIDS in 2009 with about 45,000 deaths recorded in the same year. Little has changed.

Deforestation (rampant cutting down of trees mainly for timber, firewood and charcoal), poaching, periodic droughts and land degradation, tropical storms (from November to April), etc. are some of the major environmental issues facing Zambia today.

Just like in most other African countries today, poor leadership and corruption continue to tear Zambia apart.

G. Namutelu 4 years 4 months
How can you fight poverty? Pretty simple. By lowering costs. Zambian Government, explain to me why your fuel prices are so high. The truth is that, fuel costs without taxes only 0.30 US$. Why is your fuel price above 1 US$? Are you as government aware that almost all prices are affected by fuel costs due to transportation of goods? Why is import on cars that high? Totally ridiculous. Think about the people. Stop thinking about your own pockets. When costs go down, people can and will by more as their buying power increases. When a population can buy more and buys more, more goods have to be produced. Higher production results again in lower costs per product, again resulting in lower prices. Higher production will also create jobs, meaning the youth will get jobs. Watch it. One day people will group against you and put you in jail like Egypt did to Mubarak, or even kill you like Libya did to Khadafi.

Joseph Sitali 4 years 3 months
The major problem is that we do not apply our critical thinking during elections and are moved by our bellies. We vote for political slogans and progressive ideas. Graduates now look like they cannot apply their education but the truth is they can start up businesses. But the problem is that there are no deliberate efforts from government through policies aimed at exploring entrepreneurshi p skills for graduates. The government thinks that an investor always has to be a foreigner. This has caused people to recycle the same businesses all over the country which very low paying and burdened with a lot of taxes.