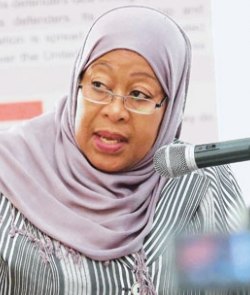 The United Republic of Tanzania or "Tanzania" for short, is the largest and most populous East African country with a total land area of about 947,300 squared kilometers (about 61,500 sq km covered by water) and about 1,424 kilometers of coastline.

Mountain Kilimanjaro, the tallest mountain in Africa and the highest free-standing mountain in the world, is found in Tanzania.

The United Republic of Tanzania has an estimated population of 63 million people with the population growth rate hovering around 3.0%.  About 36% of Tanzania's population lives in urban areas in major cities and towns such as Dar es Salaam (the administrative capital) and Dodoma (the legislative capital).

Tanzania's is about 99% African (of which 95% are Bantu consisting of more than 130 tribes) with Asians, Europeans, and Arabs forming the remaining 1% . The mainland Tanzania is about 62% Christian while Zanzibar Island is almost entirely Muslim (about 98%).

Swahili or "Kiswahili" (a Bantu language and lingua franca of the African Great Lakes region) and English are the two official languages spoken in Tanzania today.

Tanzania has a literacy rate of 77.9% for the total population with the female literacy rate hovering around 73.1%. In other words, about 77.9% of Tanzania's population above the age 15, can at least read and write.

The United Republic of Tanzania, just like in most other African countries today, faces so many developmental, social, and political challenges despite the abundance of human and natural resources.

According to the World Health Organization, Tanzania has HIV adult prevalence rate of 5.1%. About 1.7 million Tanzanians were living with HIV/AIDS in 2019 with about 27,000 HIV/AIDS-recorded deaths in the same year. Besides HIV/AIDs, bacterial diarrhea, hepatitis A, typhoid fever, malaria, dengue fever, Rift Valley fever, schistosomiasis, rabies, etc. continue to destroy several lives in Tanzania today.

Also, about 8.4% of Tanzania's population was classified obese in 2018 by the World Health Organization. Meanwhile, 14.6% of children under the age of five are underweight.

According to World Bank statistics, about 24.9 million Tanzanians were in the labor force in 2017. Meanwhile, about 26.5% of the total population of Tanzania was living below the international poverty line in 2017.

Just about 40% of Tanzania's population has access to electricity (grid) and it is worse in the rural and sub-urban communities where less than 23% have access.

Deforestation or the rampant cutting down of tress (mostly for timber, firewood, and charcoal), destruction of coral reefs (which threatens marine habitats), illegal hunting and trade (poaching of wild animals like lions for sport, elephants and rhinos for ivories. This issue greatly affects Africa's wildlife), improper waste disposals and pollution, etc. remain some of the major environmental problems facing Tanzania today.

Timotheo Ndimbo 4 years 3 months
Thanks a lot Mr. Otindo. Very good input from Sifa Hassani, but policy Formulation is one thing, what about policy Implementation in Tanzania?

Sifa Hassani Mnkeni 3 years 6 months
It is true that corruption is a problem but poor policies and strategies in development plans also are threats in Tanzania simply because bureaucrats make policies which favor donor interests, we have plenty of resources why should we rely on loans and grants! indeed we need to wake up and raise our voices....foreign aid in whatever form won't move Tanzania further instead dependency will increase.

Oscar Otindo 1 year 9 months
Corruption is gaining roots in Tanzania, and it seems to be the number one impediment in the development of many African states. Past and current heads of state have made efforts and strong commitments in fighting corruption. In 1996 the country formed a body of regulations, laws and oversight institutions aimed at investigating, preventing, and sanctioning corrupt individuals and practices leading to the publication of the Warioba report, assessing the state of corruption in the state. It also led to the establishment of the Prevention of Corruption Bureau and the Ethics Inspectorate Departments.

Although it's perceived that corruption has declined in the recent years, the Prime Minister and two other ministers were forced to resign, and the entire cabinet dissolved early 2008 due to corruption scandals in political and administrative systems. This followed an audit of the Tanzanian Central Bank exposing ministers and political leaders from the ruling Chama Cha Mapinduzi (CCM). It revealed that an estimated US$ 120 million had been lost in a scandal where local companies were paid with most of them being fictious. They also granted an American-based company a large contract in which they had vested interests.

There are various forms of corruption in Tanzania today. In Bureaucratic corruption, companies operating in the state claim that one major business constraint is inefficient government bureaucracy. It's a common practice for companies to make payments to speed up bureaucratic processes. Bribes have to be paid to get things done, making it time intensive and cumbersome dealing with permits and licenses. These kind of environment scares away investors hence reducing industrializati on and development.

Political corruption has shaken the ruling party (CCM) especially in the Richmond affair. Prime Minister Edward Lowassa, was identified as one of the major architects of the 2006 contract between the Tanzanian government and the Texas-based Richmond Development company. It was to provide 10MW to the national grid for $179 million. The generators never appeared, and "Richmond" never explained. He resigned and Jakaya Kikwete the President, fired the entire cabinet.

Takrima clause is a traditional hospitality clause defined in the election act as a gift given in good faith. It has been misused for corruption purposes and politicians invoke it by offering clothes, food, cash and construction materials during campaigns in exchange for votes. There are also widespread relations between businesses and political interests. Illicit payments are made to government officials in order to influence policy making. They are made either to affect the content of the government decrees or the votes of parliament members.

Various sectors have been affected by corruption. Companies give gifts in order to secure contracts and accountability of donor funded projects appear to be very weak. Companies involved in corrupt practices aren't blacklisted by the tender board.

Several reports have been made by both public and private sources claiming that, there's a lot of corruption and embezzlement of public funds in the tax administration. In the 1990's, the tax department in the Ministry of Finance was nicknamed the 'Tax Exemption Department' due to widespread granting of discretionary tax exemptions to businesspeople willing to pay for them. Official statistics on reported revenue from customs duties also indicate large leakages. Lack of administrative capacity create a conducive environment for corrupt practices. For instance, Tanzanian Revenue Authority (TRA) staffs solicit bribes during tax assessments. Former permanent secretary to the treasury was taken to court because of granting tax exemptions to M/S Allen Stewart Government Business Corporation Company in 2003.

The police, in particular traffic police, are considered vulnerable to corruption. Junior staff members with low salaries are engaged in petty forms of corruption while senior officers benefit from a percentage of overall bribes collected. Commonwealth Human Rights released a report in 2006 claiming that the police department was the most corrupt in Tanzania.

Natural resources are also mismanaged. For example, of the total revenues collected from timber, just a very small percentage (almost nothing at all) reaches the poor villages (who are losing all their farmlands and forestry) and local authorities. Most of it is pocketed by those greedy and corrupt politicians. It has been revealed that most of the companies involved in timber importing and exporting have close ties with high level politicians.

Although there are a lot of anti-corruption efforts in Tanzania today, it seems that the government is fighting a losing battle since the people expected to fight the vice are the same ones engaged in corrupt practices.