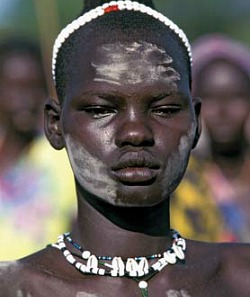 The Republic of South Sudan or "South Sudan" for short, is a landlocked country located at the North-eastern part of Africa (more precisely, the East-Central Africa region of Northeastern Africa) just at the south of the Republic of 'North' Sudan.

The Republic of South Sudan covers a total land area of about 619,745sq km (about 15% of which is covered by the vast swamp region of the Sudd formed by the White Nile. The sudd or the "Bahr al Jabal" is one of the largest wetlands in the world).

The Republic of South Sudan gained independence (from "Sudan") on July 9, 2011.

Although all religions are welcomed in South Sudan, the Republic of South Sudan is mostly a Christian-Animist blend.

South Sudan is one of the most culturally rich countries in all of Africa with a beautiful blend of several ethnic and racial groups. Murle, Mandari, Didinga, Ndogo,Dinka, Kakwa, Bari, Lango, Dungotona, Azande, Shilluk, Kuku, Bviri, Lndi, Anuak, Bongo and Acholi are some of the major ethnic groups living in South Sudan today.

Although English is the official language, Arabic, Nuer, Bari, Zande, Dinka, Shilluk, and several other local languages are spoken in South Sudan today.

However, despite the abundance of Natural resources, the new Republic of South Sudan remains one of the poorest countries in the world with over 60% of it's population living below the international poverty line ($1.90 a day). Sadly, South Sudan has become a war-torn country and the situation keeps deteriorating by the day. According to statistics, even before the current conflict, over 35% of South Sudanese children under the age of 5 were underweight, which is one of the worst cases of child malnutrition in the world.

South Sudan has one of the worst transportation infrastructure in the world. In fact, over 60% of South Sudan is inaccessible by road especially during the rainy season. This affects every sector of the economy. Take agriculture for example. Some farmers are not able to transport their farm produce to the market centers and perishable goods (like onions, tomatoes, etc.) just go waste. Also, several people die from curable diseases (especially in the small towns and villages) due to lack of transportation.

South Sudan has a literacy rate of just 27% for the total population and 16% for the female population. In other words, just about 27% of the total population of South Sudan above age 15 can read and write. Also, just about 16% of the total female population above age 15 can read and write which is one of the worst literacy rates in Africa today. Instead of using the oil money to improve education and other sectors of the economy, money from oil proceeds end up fueling wars and conflicts in South Sudan.

The Republic of South Sudan remains one of the HIV/AIDS killing zones in the world with adult prevalence rate of 3.1%. Besides the deadly HIV/AIDS, dengu fever, meningococcal meningitis, bacterial and protozoal diarrhea, African trypanosomiasis popularly known as "sleeping sickness", rabies, hepatitis A and E, typhoid fever, etc., continue to threaten several lives in South Sudan today.

The long years of bloody conflicts have destroyed a lot in South Sudan. Sadly, there seems to be no end to the numerous clashes. Over 3 million people have been forced out of their homes. Some have fled to neighboring countries and having lost thier livelihoods, almost all of them need shelter, food and medical assistance.

Just like in most other African countries today, corruption and poor governance continue to tear South Sudan apart. Almost every leader in South Sudan today is corrupt in one way or the other.

Kokole Abe 4 years 4 months
From my observation and history, almost all countries enjoying success today have gone through dark days; corruption, killings and name it and probably the people enjoying now never experienced those dark days. We are at this stage, and we surely are going to die without enjoying a bit of this independence we voted for.

The problem is, we were born when the world has documented lessons that we needed to do better at. Our so-called leaders have not embraced that as yet probably because they were surprised to finally have a lot at their disposal with no experience and in some cases, zero academic qualifications to manage those offices.

Londo Edward Eliason 4 years 3 months
One of the most crucial problems facing South Sudan today is the tribal conflict and internal insecurity especially in Juba city. People are robbed in the day light, shot dead and sometimes no arrest is made. All these to me are because of the culture of giving guns to civilians to guard themselves or their animals. The way forward is to move away from this culture by removing all guns in the hands of civilians and never to return them back.

PITIA PHILIP LODU 3 years 9 months
The problem that the country is facing now is more of psychological, I understood the fact that, we have experienced so many tragic issues which is never the first story in our country. This has happened somewhere, but the point now is how do we use such tragic moments to remedies our situation? in most cases, we tend to continue injecting wrong ideologies into the minds of youths who would have been an icon of peace. Tribalism tendency is our driver that had made it so hard for south Sudanese to forgive each other. prejudice, stereotype and discrimination has become the center of our discretion which have affected efforts to bring peace to our country. So South Sudan need peace to settle all other challenges like poor infrastructures like roads, inadequate schools with limited number of teachers, inadequate health centers few mentioned. my standpoint is that, let us use this crisis to certain what future hold ahead of us.