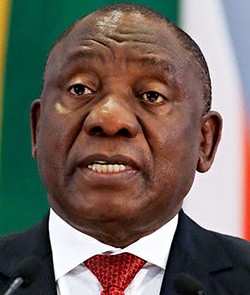 As its name implies, the Republic of South Africa (or "South Africa" for short) is a country located at the southern tip of Africa. In fact, the southernmost point of the African continent, Cape Agulhas (about 150 km east of the 'Cape of Good Hope'), is in South Africa.

The Republic of South Africa has a total population of about 61 million people with the population growth rate hovering around 1.6%.

However, despite the abundance of natural and human resources, the Republic of South Africa, just like most developing countries in the world today, faces so many political, social and developmental challenges.

The Republic of South Africa has a literacy rate of about 86.4% (one of the highest on the continent) which implies about 86.4% of South Africa's total population above the age 15 can at least read and write. However, quality education hard to come by in some places (especially in the rural communities) in South Africa.

Despite being the most advanced country in Africa today, millions of people (Black, White, Colored, etc) continue to live in poverty and in despair across South Africa today. It is worse especially at the outskirts of big cities and towns (in places like Soweto, a lower-class-populated urban area of the city of Johannesburg).

The end of Apartheid (One of the most racist systems of government the world has ever witnessed) has brought much improvement in the lives of millions across the country. However, the number of people (black, white and brown South Africans) living in poverty sadly remains very high especially in the rural and sub-urban communities. Millions of South Africans feel left out by the current administration.

South Africa has an HIV/AIDS adult prevalence rate of about 18.9% (one of the highest in the world today). According to the World Health Organization, more than 7.1 million people were living with HIV/AIDS in 2016. There were about 270,000 new HIV infections with about 110,000 AIDS-related officially recorded deaths in 2016. Although South Africa has the largest antiretroviral treatment (ART) program in the world, only about 56% of adults (infected) were on antiretroviral treatment in 2016.

Although living conditions in South Africa are generally better than in most other African countries, the Republic of South Africa, despite a recent drop in crime rates, has one of the highest crime rates in the world today with several violent crimes (such as robbery, rape, and murder) recorded every single day.

Just like in America, Brazil, and other racially charged communities around the world, racism and discrimination continue to threaten several lives and properties in South Africa today. Also, xenophobia which the intense or irrational dislike or fear of people from other countries, is sadly on the rise in South Africa today.

Deforestation (the rampant cutting down of trees mostly for timber. Also, for agricultural, industrial and infrastructural purposes), poaching (this is severely affecting wildlife population in Africa as a whole), Land degradation (mostly from mining activities and pollution), water pollution (mostly from agricultural and industrial runoffs), etc. are some of the major environmental challenges facing South Africa today

Just like in most other African countries, rampant corruption and poor governance continue to tear South Africa apart.

Sphesihle Nkanyiso Nxumalo 4 years 4 months
We need to prepare for the war and that we can do through education. We can't expect the government to do everything for us, we can make a change for ourselves, get educated, introduce our own theories we can use to describe the world as Africans. I'm not saying white people are bad but they are well prepared for the war. Lets educate our minds and stop blaming and expecting government to do everything for us. Remember change start within a person and once one can realize that and focus on making a change for the better of a nation rather than self interest, then we gonna be prepared to face the world and make Africa a better continent as a whole.

We need to prepare for the war ...


Hello,
Just some food for thought: Instead of making war we can do what you suggest at the very end of your comment. Let us change ourselves and our perspective toward fellow South Africans (of all races) and start teaching our children to not hate other people simply because of what their forefathers did. If we want to see change in this country, then we must first be willing to change ourselves. Just like you said.

If we want to move forward as a country, we must forgive the sins of the past. That is a painful process, but the moment we've done it is when the festering wounds from the past will turn into scars that no longer hurt.
Have a good day.

Leo 3 years 5 months
So yeah, the biggest issues are:
Sexual violence. Sexual assault/rape. This affects about 20-25% of adult women, 90+% of men in prison, 35+% of children of which most are boys.
High murder/homicide rate.
Racial violence.
Corruption.
Non-functioning municipalities.
Lack of clean water and sanitation.
Unsustainable (eligible-tax-payer welfare-recipient) ratio. Honestly, it is by the Grace of God people aren't at civil war yet.

Nakamoto Satoshi 3 years 4 months
South Africans need to appoligize to the world, they need to wake up and know they have lost it, the whole African Nations is angry with them.

Graham from UK 3 years 4 months
After visiting Cape Town last year I was blown away by the beauty of South Africa. My message is simple, the population must seek help and guidance from the United Nations, otherwise you will descend into an abyss of war and killing. Your infant democracy will not survive because of the hate of the past. You must move forward in peace and harmony. I hope your leaders can influence the people to a peaceful solution for all South Africans.

Barry 3 years 1 month
Why is Africa now and always been such a nightmare of a country ? With unbelievable poverty, hate, murders, drugs, diseases and so much more. It’s like the land is cursed or something. Meanwhile it looks so beautiful.

JQ 2 years 6 months
Really? South Africans are 87% literate? Have they ever asked a grade 12 learner to do a comprehension test or to read something? I think not. They might recognize the characters and words on the page but they cannot comprehend the meaning. How is that "literate"? Even with mathematics, you have grade 12 learners who cannot tell you what is 5x5 of 9x9 without a calculator. Most of this is due to education plan focusing on grammar, etc. instead of comprehension, reading, and hearing correctly. Most Grade 12 have an average of less than 50% with an extra 20-30% because it is not home language education. This all started since IQ test ( which tests the basic and general knowledge of the people tested compared to others of the same age) are not used. The department is making education plans by guessing the learners' knowledge, motivation(they assume all leaners really want to learn and more). And they are using culture as an excuse. Just one bit of advise, if a culture does not adapt, it stagnates, and can even die out.

Sid 1 year 4 months
Have great faith South Africa as the Lord Almighty can continue to improve on the adverse conditions in your great country. Pray the Hail Mary please.