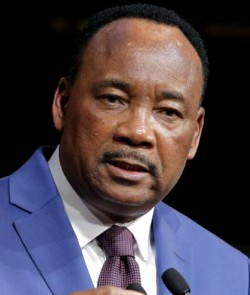 However, 80% of Niger's total land area is covered by the Sahara desert making arable land (land good for farming) very hard to come by in Niger today. The spreading of the Sahara desert chases farmers away from their farm lands leaving many farmers with nothing but absolute poverty.

The Republic of Niger has a total population of about 22.3 million people with the population growth rate hovering around 3.8%. A greater part of Niger's population lives in rural areas mostly as poor subsistence farmers who grow crops (mostly millet) and rear animals (mostly cattle, sheep and goats) just to feed themselves and their families.

However, despite the abundance of natural resources, Niger remains one of the poorest countries in the world today with over 70% of its population living below the international poverty line of $1.90 a day.

Niger has one of the worst literacy rates in the world today. Niger's literacy rate currently hovers around 28.7% for the entire population with the female literacy rate hovering around 15.1%. In other words, just about 15.1% of Niger's total female population above the age 15 can read and write which is very bad.

Because of it's position on the map, Niger faces several natural challenges such as drought, desertification and flooding. Nothing grows well on the desert so as the Sahara desert continues to spread, more arable lands are lost. The severe droughts in this part of Africa often leave millions of people starving. Also, unpredictable heavy rainfall patterns often lead to severe flooding in some parts of Niger. The heavy flooding often destroys farms, lives and properties and live many with nothing but poverty and despair.

Because of extreme poverty and hunger, most children of school-going age are out of school in Niger today.

Lack of good drinking water and water for domestic purposes is another major problem Nigeriens face every single day. Because of the desert, water is very scarce in Niger. The few water sources in Niger are mostly polluted which accounts for the high level of diseases such as cholera, dysentery, bilharzia, etc. in Niger today.

Just like in most other African countries, corruption levels remain all time high in Niger today. Almost every political figure in Niger today is corrupt in one way or the other, leaving the majority with nothing but poverty and despair.