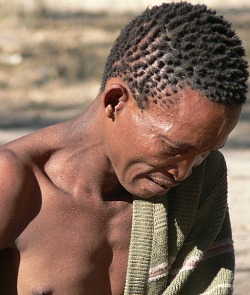 Despite its small population size, Namibia remains one of the most culturally rich countries in all of Africa with several different ethnic and racial groups living peacefully together.

However, despite the abundance of natural resources, the Republic of Namibia remains one of the poorest countries in all of Africa with about 56% of its total population living below poverty line (live on less than $2 a day with majority living on less than $1.25 a day). Namibia's literacy rate is around 88.8% for the total population with the female literacy rate around 88.5%. In other words, about 88.5% of all females above the age 15 living in Namibia today can at least read and write which is far better than in most other African countries.

However, despite this 'good' literacy rate, about 43% of Namibians remain unemployed. Namibia's shaky economy depends heavily on mining which accounts for about 8% of GDP, but provides more than 50% of foreign exchange earnings. Meanwhile, the mining sector employs just about 3% of the population. The problem here is that, many students graduate from school with degrees but unable to get better jobs to do.

Another major reason is that, although the majority can read and write, quality education is something very hard to come by not just in Namibia but in almost all African countries today.

The Republic of Namibia has perhaps one of the worst climatic conditions in all of Africa. Namibia is mostly desert, hot and dry with rainfall very sparse and erratic. Prolonged periods of drought remain a major problem in Namibia today. This doesn't favor agriculture at all in most parts and in drought years, food shortages remain major problems especially in the rural areas. The Republic of Namibia normally imports about 50% of its cereal requirements. Limited natural freshwater resources, wildlife poaching, land degradation (gradual deterioration of the environment), desertification, etc. remain some of the major environmental issues facing Namibia today.

The Republic of Namibia remains one of the HIV/AIDS killing zones in Africa with a very high HIV/AIDS adult prevalence rate of 13.1%. In 2009, more than 180,000 of the population were living with HIV/AIDS with about 6,700 deaths recorded within the same year. Besides HIV/AIDs, the deadly malaria, bacterial diarrhea, typhoid fever, hepatitis A, schistosomiasis, etc. continue to threaten several lives in Namibia today.

Just like in most other African countries today, corruption and poor governance continue to tear Namibia apart. The few in the top (the greedy politicians) continue to enjoy while the average Namibians continue to die in silence.