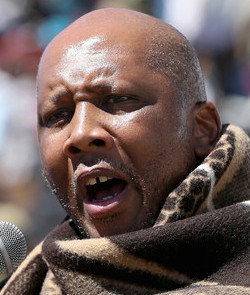 The Kingdom of Lesotho (formerly known as Basutoland) or “Lesotho” for short, is a small mountainous landlocked country in southern Africa surrounded completely by the Republic of South Africa. In other words, The Kingdom of Lesotho is an enclave of South Africa (within South Africa but with its own borders). The name Lesotho which simply translates “The land of the Sotho speakers” was adopted after independence from the United Kingdom in 1966.  Lesotho is one of the smallest countries on mainland Africa covering a total land area of about 30,355 square kilometers with a population of about 2.2 million people. Lesotho’s population growth rate hovers around 1.3%. About 27.3% of the Basotho (Please note. A person is “Mosotho” and people are “Basotho”) population lives in urban areas in major cities and towns such as Maseru the capital. Maseru the capital of Lesotho contains about 300,000 people. The remaining of the population (almost 75%) lives in rural areas mostly as poor subsistence farmers who grow crops and rear animals just to feed themselves and their families.

As its name implies, Sesotho (the land of the Sotho speakers) is truly a land of the Sotho speakers. The Sotho speakers (the Sotho ethnic group) together make up about 99.7% of the population. Europeans, Asians (mostly Chinese and Indians), and other minor groups form the remaining 0.3%.  Both Sesotho (southern Sotho) and English are official languages. In other words, those who don’t speak Sesotho can use English in official communications. Apart from Sesotho and English, although not official languages, Zulu, Xhosa, and other ethnic languages are also spoken in Lesotho today. Lesotho is mostly Christian with about 80% of the population claiming Christianity as their main religion. The remaining 20% are mostly Traditional African worshippers (indigenous believers).

Just like its “mother” country South Africa, Lesotho is blessed with abundance of natural resources including, water, grazing land, diamonds and other mineral deposits. Despite the abundance of natural resources and the “high” literacy rate, Lesotho remains one of the poorest countries in Africa today over half of its population living below the international poverty line. According to a 2016 UNDP report, about 57% of Lesotho’s population lives below the international poverty line (please note. The international poverty line is now $1.90 a day). Lesotho’s national unemployment rate hovers around 34.4% with the female unemployment rate around 41.9%. In other words, despite more girls in school than boys, this does not proportionally reflect in the workforce. Almost half of Lesotho’s female population is unemployed.

Because Lesotho is mostly mountainous, there is very little arable land (land good for farming) leaving its population vulnerable to food shortages. Lesotho depends heavily on South Africa for survival. In fact, Lesotho imports over 90% of goods it consumes from South Africa. Lesotho’s economy depends heavily on remittances (money sent home by immigrants). In fact, about 35 to 40% of Lesotho’s active male wage earners work in South Africa. Sadly, most become victims of forced labor especially in the agricultural and mining fields while some others are forced into committing crimes.

Just like in most other African countries, corruption and poor governance continues to leave many in Lesotho today with nothing but poverty and despair.