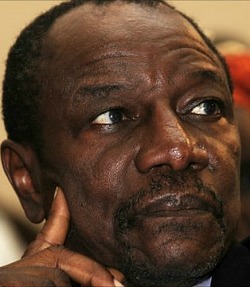 The Republic of Guinea or Guinea-Conakry (to distinguish it from Guinea-Bissau a neighboring country and Equatorial Guinea) is a West African country bordering the North Atlantic Ocean between the Republics of Guinea-Bissau, Mali, and Senegal in the North and the Republics of Sierra Leone, Ivory Coast and Liberia in the South. The Republic of Guinea has a total land area of about 245,857sq km (about 140sq km of which is covered by water) with about 320km of coastline.

Although French is the official language spoken in Guinea today, each ethnic group has its own language. Mandinka, Susu and Fula are some of the major vernacular languages spoken in Guinea today in addition to French the official language. The Republic of Guinea is an "Islamic" country with Islam being the most dominant religion. About 85% of the total population of Guinea are Muslims. Christians and the Traditional Animist believers form just about 15% of the total population.

The Republic of Guinea just like its neighboring countries is blessed with abundance of natural resources such as gold, diamonds, bauxite, uranium, iron ore, hydropower, fish and salt.

The Republic of Guinea remains one of the HIV/AIDS killing zones in the world today with HIV/AIDS adult prevalence rate around 1.3%. About 80,000 people were living with HIV/AIDS in 2009 with about 5,000 deaths recorded within the same year. Apart from HIV/AIDS, the deadly malaria, Lassa fever, ebola (nb: Guinea is now ebola-free), etc. continue to threaten several lives in Guinea today.

Just like in most other African countries, poor government, corruption, etc. continue to tear Guinea apart.