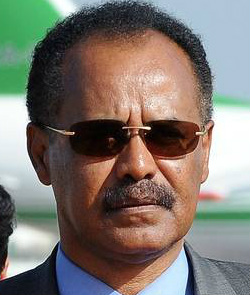 Eritrea (which means the "red land") is a small country in the horn of Africa (the easternmost projection of the African continent) bordering the Federal Democratic Republic of Ethiopia to the South, The People's Republic of Djibouti to the Southeast, and Sudan to the west. The State of Eritrea also borders the Red Sea in the east and northeast right across from Saudi Arabia and Yemen.

Officially, the State of Eritrea covers a total land area of about 117,600sq.km (about 0.14% of which is covered by water) with an "estimated" population of 5.5 million people. The population growth rate of Eritrea hovers around 2.4%.

The Independence of Eritrea (from Ethiopia) in 1993 brought about new hopes and aspirations. Unfortunately however, tEritrea has seen very little to no improvements at all in almost all sectors of its economy. Eritrea is crippled by so many restrictive economic and social factors. Although about 80% of the total population of Eritrea are into agriculture, agriculture contributes very little to the Eritrea's GDP. Like in most other African countries, most Eritrean farmers are into subsistence farming whereby they grow crops and rear animals just to feed themselves and their families. In times of crop failure, many are left with nothing but poverty and despair.

The "costly" war with Ethiopia, popularly known as the "Eritrean-Ethiopian war", from May 1998 to June 2000, severely crippled Eritrea's economy. GDP growth in 1999 fell to less than 1%, and GDP decreased by 8.2% in 2000. In May 2000, the war resulted in some $600 million in property damage and loss, including losses of $225 million in livestock and 55,000 homes. The war also destroyed the rail link between Asmara and Massawa, and prevented the planting of crops in Eritrea's most productive region. This caused food production to drop by 62%. Just like in neighboring Ethiopia and other countries in the horn of Africa, extreme poverty and hunger continue to threaten several innocent lives in Eritrea today.

The sole political party in Eritrea, "The People's Front for Democracy and Justice (PFDJ)", continues to kill and destroy private businesses with huge taxes and other restrictive economy policies which unfortunately drives many investors away. The government strictly controls the use of foreign currency by limiting access and availability which sadly creates a hostile environment for private-owned business and startups. Just a handful of private enterprises remain in Eritrea today. Eritrea's economy depends heavily on taxes paid by members of the diaspora.

Poor education (illiteracy) remains a major problem in Eritrea today. Eritrea has a literacy rate of about 67.8% for the total population with the female literacy rate hovering around 57.5%. In other words, just about 57.5% of the total population of females above the age 15 living in Eritrea today, can read and write. Although this literacy rate is above average in this part of Africa, Eritrea's literacy rate falls far below expectations compared to many other African countries. Unfortunately however, the current government of Eritrea doesn't pay much attention to sector of education.