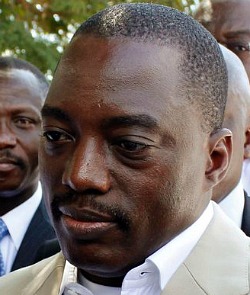 Democratic Republic of Congo (also known as Congo-Kinshasa) is the 2nd largest country in Africa by total land area. DR Congo has a total land area of about 2,344,858sq.km. In terms of population size, DR Congo is the fourth most populous country in Africa today with a population of about 81.5 million people. DR Congo's population growth rate hovers around 2.6%. About 40% of the population lives in urban areas in major cities and towns such as Kinshasa. Kinshasa the capital of DR Congo contains about 9 million people.

Democratic Republic of Congo is one of the most diverse and culturally rich countries in Africa today with over 200 ethnic and tribal groups living together. The four largest ethnic groups - Mongo, Luba, Kongo (all Bantu), and the Mangbetu-Azande (Hamitic) together make up about 45% of the population. Although over 700 different languages and dialects are spoken in DR Congo today, French remains the official language and the language for governmental purposes. In fact, The Democratic Republic of Congo is the most populated officially recognized francophone country in the world today. DR Congo is predominantly Christian with Catholics and Protestants forming about 70% of the total population. Muslims make up about 10% of the total population.

However, despite the abundance of both natural and human resources, DR Congo remains one of the poorest countries in the world today with at least 50% of its population living below the poverty line. Although DR Congo has seen some great improvements these past couple of years, DR Congo continues to live in poverty with the fear of war and monsters (terrorists). DR Congo suffered and continues to suffer in the hands of barbaric dictators and crazy policy makers. Barbaric dictators such as Mobutu Sese Seko, Laurent Kabila, etc. who ruled Congo for decades helped demonically cripple DR Congo destroying millions of innocent lives and properties.

DR Congo has a literacy rate of about 67% for the entire population with the female literacy rate hovering around 57%. In other words, just around 57% of all females above the age 15 can read and write in DR Congo today which is very bad compared to most other African countries.

DR Congo has an HIV/AIDS adult prevalence rate of about 1.1%. Although this is far better than in countries like South Africa, Swaziland, etc., about 500,000 people were living with the disease in 2012 with about 32,000 deaths recorded within the same year. Other killer diseases such as the deadly malaria, sleeping sickness, typhoid fever, cholera, etc. continue to destroy several lives in DR Congo today.

Just like in many other African countries today, corruption levels remain at all-time high in DR Congo today. Government officials receive pay increments every now and then while most of the poor especially those in the villages and small towns wallow in extreme poverty and hunger. Almost all politicians and governmental agencies in Congo today engage themselves in corrupt activities fuelling nothing but poverty, war and despair.