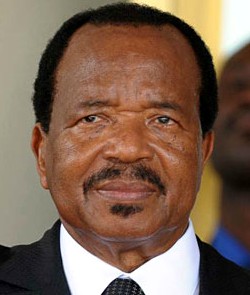 Cameroun just like its neighboring countries is blessed with abundance of natural resources such as petroleum, bauxite, iron ore, timber, hydropower, etc.

However, despite the abundance of natural resources in Cameroon today, Cameroon has an unemployment rate between 40-50% with about 50 to 55% of the total population living below poverty line. In other words, the most Cameroonians live on less than $1.90 a day.

Volcanic activities with periodic release of poisonous gases from Lake Nyos and Lake Monoun, deforestation (or the rampant cutting down of trees mostly for timber, fuel, etc.), overgrazing (of farm animals), desertification (or the turning of fertile lands into desert/non-farming lands) , poaching, over-fishing, etc. remain some of the major environmental issues facing Cameroon today.

Just like in most other African countries today, Corruption levels remain at all time high in Cameroon today. Almost every political figure in Cameroon today (especially the president) is very corrupt in one way or the other, leaving the average Cameroonian with nothing but poverty and despair.

Esimboe Sylvester 4 years 3 months
What is the difference between this literature and the actual Cameroon? Little or nothing. Cameroon is the worst African country when scaled on an African developmental chart. Most corrupt government, ill-educated police force, under-trained armed forces, ill-equipped and understaffed medical facilities, oppressed and over-censored media, most controlled and least functional judicial system, most brainwashed citizenry and least operational legislative branch. In fact, it has been reduced to some Biya village. What a shame.

Gary Henderson 4 years 3 months
Cameroon, look over your shoulder, Sunni Muslims are in your country and more are on the way from Pakistan, Nigeria, encouraged and financed by Saudi Arabia. They brought enough to the Central African Republic to topple a relatively peaceful country and set the stage for a government controlled by the horrors of Islam/Shariah. What country has ever benefited by the presence of Islam? Ever?

As Winston Churchill said about the Sudan, in 1897, "The institution of slavery will never end in the world until men stop worshiping Islam". That was more than 100 years ago, and Sudan is still a cesspool of violence today.

Ronald 4 years 3 months
Cameroon was a best country until year 2000. The problem of this country is first of all his Government, then mentality of people.I don't believe that some rich country like this had a people living without light or water.The reelected president Paul Biya for 86 years old whom destroy that country with his peers can continue because everyone in this world will go. I just wish the best for my country because I can't write every words that I have in my heart here. :sigh:

Noah Bende 3 years 10 months
Cameroon, the Land of Promise, Cameroon, the Land of Glory! In the midst of all the corruption and all the eminent negativity, lies the opportunity of an economic giant. Cameroon shall surely be revived and rebuilt even if she was reduced to nothing - she is so blessed that she can rise again and she will. I love Cameroon.

Chia Basil 11 months 16 days
I sincerely believe that someday this country will be great Cameroon will someday be the icon of African greatness.