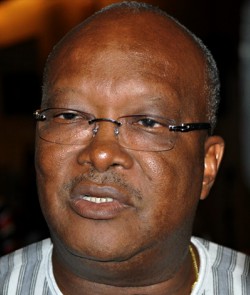 Burkina Faso's population is concentrated at the central and southern parts of the country; the east, north, and southwest are less populated. Burkina Faso is cut by the three principal rivers of the Black, Red, and White Voltas.

Islam remains the most dominant religion in Burkina Faso today with about 61% of the total population being Muslims. Christians including Catholics and Protestants form just about 25% of the total population. Traditional believers, Animists, and the other minor religious groups make up the remaining fraction of the population. Burkina Faso is a culturally rich country with several ethnic and racial groups living together. Mossi the most dominant ethnic group make up about 40% of the population. The Gurunsi, the Senufo, the Lobi, the Bobo, the Mande, the Fulani, and the several other minor ethnic groups together make up the remaining 60% of the population. Although French remains the official language, several native African languages are written and spoken in Burkina Faso today.

Burkina Faso just like its neighboring countries is blessed with abundance of natural resources such as gold, phosphates, manganese, limestone, marble, etc.

Burkina Faso has HIV/AIDS adults prevalence rate of 1%. Although this prevalence rate is far better than in some other African countries, officially, about 95,000 people were living with the disease in 2016 with about 3,100 deaths recorded within the same year. Other killer diseases such as dengue fever, malaria, yellow fever, rabies, bacterial and protozoal diarrhea, typhoid fever, schistosomiasis, etc. continue to threaten several lives in Burkina Faso today.

Droughts and desertification have severe effects in this part of the world, severely affecting agricultural activities. Other factors such as overpopulation, overgrazing of farm animals, deforestation, etc. continue to fuel soil degradation and environmental deterioration, all of which affect agricultural production in Burkina Faso today. Poverty is worse especially in the rural areas where majority of the population lives.

Lack of Good drinking water and water for domestic purposes remains another major problem in Burkina Faso today. Water is very scarce in Burkina Faso due to the recurring droughts and desertification in this part of the world. Women and children walk miles upon miles just to fetch water sometimes with heavy loads on their heads.

Corruption levels remain at all time high in Burkina Faso today. Almost all Government officials and people of power in Burkina Faso today engage themselves in corrupt activies in one way or the other leaving the average person on the street with nothing but absolute poverty and despair. Government officials receive pay increase and allowances every now and then while children of school-going age remain at home.

Child labor is on the rise in Burkina Faso today. Due to the extreme poverty levels in some parts of the country, it is very common to find children of school-going hawking on the streets of major cities and towns such as Bobo-Dioulasso (the second largest town in Burkina Faso), Ouagadougou the capital, Ouahigouya, etc.