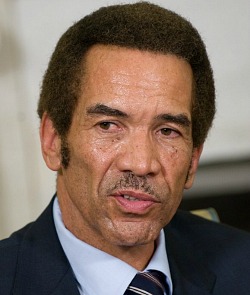 Botswana has a total land area of about 566,730 squared kilometers and a total population of about 2.4 million people with the population growth rate hovering around 1.7%. About 62 percent of the Botswana population lives in urban areas in major cities and towns such as Gaborone the capital. Gaborone the capital of Botswana contains about 200,000 people. Francistown, the second-largest city in Botswana, is home to about 100,000 people.

Although about 70% of Botswana is covered by the Kalahari desert, Botswana just like its neighboring countries is blessed with abundance of natural resources including precious minerals such as diamond (accounting for more than 75% of GDP, 70-80% of export earnings, and about half of the government revenues), nickel, coal, iron ore, silver, copper, salt, etc.

Unlike in most other African countries, Botswana has a very high literacy rate of around 80% (both males and females) which implies about 80 percent of all people above the age 15 can at least read and write in Botswana today which is great. The high literacy rate is mainly because of the free education system in Botswana today. Botswana offers free education for all up to the university level which is great. Also, Botswana remains one of Africa's most stable countries today with the continent's longest continuous multi-party democracy. It is relatively free of corruption and has a good human rights record.

Despite these great achievements, Botswana like its neighboring countries faces so political, social and developmental challenges.

Although life in the big cities and towns has improved a lot in the past couple of years, poverty level remains all time high in some rural areas due mainly to desertification, inequality and discrimination, unequal distribution of public funds, etc.

Botswana has the second highest HIV/AIDS adult prevalence rate (about 25%) in the world today with about 400,000 people (about 17% of the population) living with the virus. Those living with the disease are sometimes abandoned by their families, communities and even the government, worsening the already bad situation for many especially in the rural areas.

Most children have lost either one or both of their parents to HIV/AIDs and are sometimes abandoned by their communities. Some of these poor children roam about on the streets of Gaborone, Francistown, Molepolole and other big cities and towns all day and night. Although anti-retroviral drugs and other treatment methods are available, not many people living with the virus have access to treatment.

Most of the people living in rural areas are subsistence farmers who grow crops and rear animals just to feed themselves and their families. However, due to desertification, most farmers in the rural areas have lost their farm lands leaving most with nothing but poverty and despair.

Gomolemo Leso 3 years 8 months
There is a great need of family life education. The world is in a rapid change. We are exposed a widening influence of technology, culture, religion, education system, transportation and other socio-economic variables. Although there may be advantages, these factors massively corrode the current family communication line or structure, leading to lack of preparation for life stages/challenges, poor child development and consequently, societal problems at large.

In order to meet the VISION 2036 prime objective (prosperity for all Batswana), we should address social ills from a family level as a basic unit or the individual's character reference. It is wiser to deal with the source of pain than to treat the symptom.