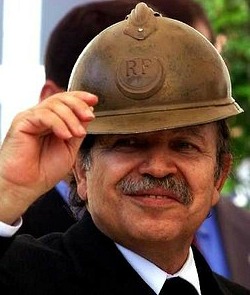 The People's Democratic Republic of Algeria has a total population of about 35.5 million people with the population growth rate around 1.17%.

The Arab-Berbers (the most populous ethnic group) make up about 99% of the total population. Europeans and other minor groups make up the remaining 1%. More than 66% of the total population of Algeria live in major cities and towns such as Algiers the capital of Algeria (Algiers contains about 3 million people) and Oran another major city. Oran contains about 1 million people. Although Arabic is the official language, several other languages including French and Berber dialects are spoken in Algeria today.

Just like its neighboring countries, the People's Democratic Republic of Algeria is blessed with abundance of natural resources such as petroleum, natural gas, uranium, zinc, lead, iron ore and phosphates. However, despite the abundance of natural resources, the Republic of Algeria just like its neighboring countries, faces so many challenges both man-made and natural causes. Algeria has a literacy rate of 69.9% for the total population and a female literacy rate of 60%. In other words, about 69.9% of the total population of Algeria above age 15 can at least read and write.

The mountainous areas of Algeria face so many natural hazards including severe earthquakes in some areas, mudslides and floods in the rainy season. Overgrazing and other poor farming practices worsen the problem of soil erosion and desertification in some areas. Improper sewage disposals, improper industrial waste disposals (such as petroleum refining wastes), and other industrial effluents pollute water bodies such as rivers and coastal waters including the Mediterranean Sea. Inadequate supplies of potable water remains a major problem in Algeria today.

Another major problem facing Algeria today is corruption and poor governance. The rising costs of living in Algeria today continue to drive many especially the youths crazy. The Algerian President Abdelaziz Bouteflika (who has been in power since 1999) and his cabinet in the past months have been trying to wrap over some of the problems by deploying some of Algeria's nearly 150 billion in foreign currency reserves to help ease prices on basic goods. However, the root causes remain and most of the problems remain unsolved while tensions continue to build by the day in Algeria today.