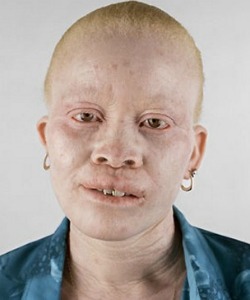 Africa is the worst place to be an albino. In a land where crazy superstitious beliefs and ignorance reign supreme, albinos can only pray, hide, or run faster than their legs can carry them. Albinos run all day and night, and not from wild animals nor some strange creatures from outer space. Rather, albinos run away from fellow human beings. Albinos continue to run from the lack of compassion and love, and sometimes, from sheer wickedness. Albinos continue to run all day and night for the heart of man is desperately wicked.

As most of you know, albinism is the lack of melanin, a pigment in the skin, eyes and hair which protects us from the sun's ultraviolet rays. In other words, melanin is that pigment that gives skin, hair, and eyes their color. Albinos are individuals lacking melanin. A condition known as albinism.

Albinos are individuals suffering from albinism and they are vulnerable to medical complications as well as social discrimination.

In most parts of the world today, social discrimination isn't a big issue for albinos because, most people have come to realize albinism isn't that a crazy "disease" after all. Albinism isn't a disease. Gone are the days when biblical diseases like leprosy terrified the soul of humanity. Gone are the days when people were thrown out of their communities for having incurable diseases. Gone are the days when men lived in total darkness. Light has come and the world is seeing things we could only dream of centuries ago. The sad thing however is that, not everybody has seen the light. Many in some remote corners of the world still live in total darkness. Africa is no exception. Many Africans continue to live in darkness.

Every culture has some crazy superstitious beliefs and some often take things to the extreme. Many Africans have seen the light and many are seeing the light, and we pray many more continue to see the light. The majority of Africans have no problem at all with albinism. In fact, albinos in Africa continue to run not from the average African but from the terrorists and monsters who continue to dwell in the dark shadows of crazy superstitious beliefs, illiteracy and ignorance. Some Africans continue to believe in black magic and some other crazy superstitious beliefs. Some even take things to the extreme and don't mind attacking their fellow humans in order to satisfy their beastial instincts. In Africa today, the social discrimination against albinos is far worse than even the medical complications albinos endure every single day.

In Tanzania, witchdoctors are busy spreading this false belief that, expensive concoctions made from albino limbs, genitals, hair, skin, etc. bring good luck. This has led to many albinos being murdered just for their "miraculous" body parts. In other words, albinos are hunted by 'albino hunters', murdered, dismembered, and body parts sold to witchdoctors.

In other places like Zimbabwe, it's believed that having sex with an albino cures HIV/AIDS completely. This crazy superstitious belief has led to the rape of several innocent albino men and women. In other words, poor innocent albino people are being infected with the deadly HIV/AIDS all because of a crazy superstitious belief that sleeping with albinos cure HIV/AIDS, and the sad thing is that, the government of Zimbabwe doesn't seem to care.

For black African albinos, life is a living hell. Not only are their body organs hacked off and sold to witch doctors to concoct wealth-enhancing charms, but justice has been far too slow in coming for them. It has been reported by authorities that some families even kill albino babies at birth to avoid discrimination. Why? Because, in some cases, entire families with albinos are discriminated against in Africa.

According to science, albinism is genetically inherited and it is caused by a recessive gene that is usually associated with other mutations as well. For example, many albinos also suffer from several eye problems. In Tanzania (one of the albino killing zones in Africa), the rate of albinism is very high at 1 out of every 4000 births. The rate, according to science, increases with in-breeding (incest) but there are other factors as well. Although albinism is hereditary, albinos can have normal offspring with a mate who doesn't have the recessive gene.

Human beings are not the only ones affected by albinism. There are albino gorillas, reindeers, albino snakes, frogs and even albino birds. In fact, there is albinism in almost all animal species.

There is no known way of preventing albinism. In most cases, genetic counseling is recommended for people with a family history of albinism when deciding to have children. Albinos can expect to have a normal life span but for those suffering from "Hermansky-pudlak syndrome", skin Cancer, etc., the life expectancy could be reduced due to lung diseases, bleeding disorders, etc.

African albinos are so noticeable and so suffer the worst kind of discrimination, and it's almost impossible for most albinos in Africa today to enjoy normal lives. It is a nightmare to think of the uncertain and awful lives our albino brothers and sisters have to live just because of a tiny "flaw" in their DNA. The little we can do as humans is to make the lives of our fellow humans better, and not to attack them.

In an effort to stop the trade and albino killings, the police in Tanzania continue to arrest people suspected of murdering albinos and those involve in the selling of body parts to witchdoctors. The government has "officially" banned this trade and has also pulled licenses of healers suspected of engaging in this barbaric practice. It is a great initial step and we thank the Tanzania government but much more needs to be done. Several albinos continue to die in Tanzania today and we feel the government isn't doing enough. Unlike the Tanzanian government, who is at least doing something about this issue, the Malawian government and people have completely failed Africa in this fight and we urge all friends and citizens of Malawi to stand up to their government and protest this injustice.

Evans Yirenkyi 3 years 8 months
This is a great piece, I believe it's about time we put a stop to this negative attitude we show towards our albino brothers and sisters. we must cultivate the habit of loving and caring for them so that they'll also feel a sense of belongingness. It wasn't their fault to be born as such. LET'S ALL BE ONE.