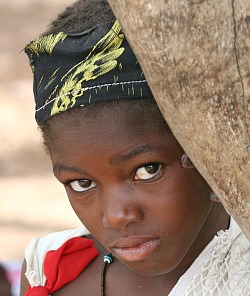 Many writers and analysts go to the extent of listing our problems by bullet points. However, the problems and challenges facing Africa today go far beyond bullet points. In fact, they are quite interconnected.

So yes, Africa is crippled by so many problems. However, as I mentioned above, these are not problems we can simply list by bullet points.The problems facing Africa today are quite interconnected and must be tackled in “whole”.

Africa is the richest continent in terms of human and natural resources. If so, why then is Africa branded "poor"?

Well, Africa is poor because despite the abundance of human and natural resources, many people continue to wallow in poverty and in despair. In fact, millions continue to starve in some parts of Africa (especially in the war-torn areas like Sudan, South Sudan, Somalia, Northern Nigeria, Central African Republic, etc) and millions more continue to die from preventable and curable diseases like HIV/AIDS, malaria and others. Many children of school-going age are out of school because of poverty. Child labor is on the rise especially in the rural and sub-urban communities where poverty rates are very high. Many continue to toil all day in the burning sun and in the pouring rain yet can barely afford to put food on the table. So yes, Africa is poor and there is no doubt about it.

On the other hand however, a bigger question remains quite unanswered. Why is Africa poor?

Well, to begin with, God did not disappoint Africa in any way. We have almost everything. We are blessed with abundance of natural resources. The world cannot run without resources from Africa. In fact, the world runs on Africa's blood. In case you doubt it, take a closer look at your cell phone and other electronic devices because there is a huge chance they contain some minerals (like cobalt) from the Congo and other African countries. There is also a huge chance the piece of diamond in your wedding ring came from Africa. You cannot possibly discuss the gold economy without mentioning Africa. Why? It is because Africa is where most of the gold in the world today comes from. Almost half of the gold ever mined on Earth has come from a single place – Witwatersrand, South Africa, and that is a fact.

Anytime you grab a cup of coffee or hot chocolate in the morning, please don’t forget to thank Africa (especially countries like Ethiopia, Ivory Coast, Ghana, etc) because there is a huge chance the coffee and cocoa beans came from Ethiopia, Ivory Coast, Ghana or some other African country. I can go on and on. So yes, Africa is the engine on which the world runs. If Africa has all these resources and “power” then why is Africa still branded “poor”? Our lands and water bodies are the most fertile so why do we continue to starve? Africa is the least polluted continent on earth so why all these diseases and sicknesses we face today in Africa? We face these and many more problems mainly because of illiteracy and Ignorance.

Illiteracy is what breeds war, conflicts and insecurity. Conflicts and insecurity on the other hand breed nothing but poverty and despair. It is very easy for terrorist organizations like Boko Haram (in northern Nigeria), ISIS (in North Africa) and Al Shabaab (in East Africa) to recruit new members in Africa. Why? Because most of these new recruits are unemployed illiterates on the streets who find nothing better to do with their time. It would be very difficult for these terrorist organizations to convince gainfully employed young professionals to pick up armaments and some dirty shoes and march in the bushes terrorizing innocent people for no good reasons at all.

Besides fueling conflicts and insecurity, illiteracy also affects Africa in so many other areas. Take the issue of the poor illiterate farmers for example. Most farmers in Africa today are subsistence farmers who grow crops and rear animals mainly to feed themselves and their families. However, because most of these farmers are illiterates, they miss out on information about new and proper farming techniques and ways to increase their yields, etc. So at the end of the day, food production is low and we all suffer. In other words, illiteracy both directly and indirectly affects even food production in Africa and fuels poverty all across the continent.

Most people in rich countries think that sending more financial aid to Africa will help alleviate and even end poverty. However, that is a huge mistake because the aid rich countries send to Africa almost always end up in wrong hands. Western (foreign) aid does more harm to Africa than most people think. It fuels corruption and in some cases, even pays to kill innocent people. There is this interesting article here on AfricaW.com about how foreign aid destroys Africa and I will encourage you to read it.

Corruption is a major issue in almost every African country today. Anytime the issue of corruption comes up, people often think about our corrupt leaders only. Yes, it is true our leaders are the most corrupt on planet earth. However, corruption in Africa runs deeper than that.  Almost everybody in Africa is corrupt in one way or the other. In places like Nigeria and Kenya, corruption has become a “normal” part of everyday life. Even some Reverend fathers and Imams collect bribes before praying for people. Some parents have to pay bribes before their children can gain admission in some schools. People are left to die in some hospitals just because their families cannot afford to pay bribes. Policemen and women in uniforms openly collect bribes from motorists with no shame at all. Some corrupt law enforcement officers and agencies collect bribes and set criminals free. In other words, because of corruption, criminals roam free in Africa today. Corruption just like youth unemployment, explains the high crime rates in places like South Africa, Somalia, Nigeria, etc. Once again, we can trace all these back to illiteracy and ignorance. In most cases, because of illiteracy and ignorance, the poor are not able to hold their leaders accountable. Teaching people the dangerous effects of corruption on the society as a whole can go a very long way in helping break this cycle.

Corruption and poor governance go almost hand-in-hand. Corruption brings about misappropriation of public funds and creates favorable environments for those in power to easily loot from their communities’ coffers. At the end of the day, those in power enjoy while the average person on the street suffers. There can never be true democracy in a place where corruption runs rampant. Our corrupt leaders refuse to leave office after their terms and their children take over after after they pass away. “Power” has become a family property in Africa all thanks to corruption. We are easily manipulated by our corrupt leaders because of illiteracy and ignorance. We fail to hold them accountable and they take pleasure in manipulating us. Because the masses are not well informed, they are easily manipulated by these corrupt leaders and the outcome is what we are witnessing today in Africa.

In 1980, Africa had a total population of about 478,000,000. Africa’s population today is over 1.2 billion people and the population is expected to double by 2050 according to the United Nations. Some people often blame Africa’s population explosion for almost all the problems we face today in Africa. It is true to some extent. Poor family planning (caused mainly by illiteracy and ignorance) and archaic cultural practices and traditions play major roles in Africa’s population explosion. Take the issue of child marriage in Nigeria for example. Girls as young as 13 are being forced into early marriages all because of some crazy religious and cultural beliefs and practices. Most of these children drop out of school and end up teenage parents and child-bearing “machines”. At the end of the day, several innocent children are born into absolute poverty without any means to cater for them, continuing the cycle of poverty. On the other hand however, if China could contain its over 1.4 billion people and still prosper to this extent, what stops Africa from achieving a similar feat?

Kan Kibiz 10 months 11 days
The problems of Africa are squarely and strongly a creation of the Wazungu. Why blame victims of white terror? No amount of assumption or coercion can eradicate that mess by Wazungu, and we know even today, they interfere, frustrate and kill African leaders and heroes. It is biased ignorance that appropriates blame on Africans, who are merely suffering victims of white aggression, sabotage and gross destruction through savage conspiracy in order to loot and enslave Africans forever. To blame Africans again is therefore to wrongly blame ourselves as victims of evils committed by Wazungu, which we never plotted, created or executed. But to think he recruits the worst Africans as his puppets (useful idiots) and shout that these are Africans, is by itself evil and satanic. Under normal African way of life, these people Wazungu used to help him destroy Africa were termed as social misfits/outcasts. They do not represent Africa in any way.

Does Amin represent Africa? And should we ignore the effectiveness of the power of covert, the brainwashing, mental manipulation, violence and other tools of mind control against Africans? These Wazungu (CIA) used huge amount of money to research intensively, crude methods and means of how to hack the minds of man, and program it (it is top secret) to his desires. They learnt and practice lethal means and use of deception, propaganda, brutal force, terrorism and savage violence as a mind control means. These are not people that Africans should follow. They are evil and criminals.

Once violence is effectively used, they apply social engineering (mind hacking) schemes via funding African School curriculums, fake religions, money, Info-warfare, drugs, etc. to mis-educate and mislead Africans for the rest of their lives. This how our grandparents were forced in order to adopt and accept this obviously evil and satanic Western way of life, which they called civilization, but is plain barbarism. Africans adopted it despite the fact, it was deceitful and inferior to African culture and traditions, and in all ways, criminal and evil in nature. Once they conformed, they were used to recruit and educate their children and that process goes on to this day. To achieve it, these predatory psychopaths target Africans from birth. They destroy natural processes which is against the laws of God and nature. It is a case of mental Sabotage.