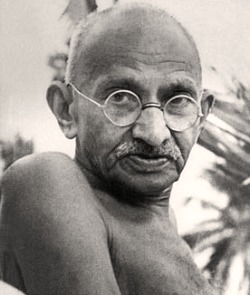 To the world and beyond, Gandhi was and remains a peace icon. Why? Because he (Gandhi) was a man of "peace". The question however is, what is "peace" and what makes a man a “peace icon”? Although some may disagree based on their own definitions, India’s Mahatma Gandhi, without a doubt, was one of the most racist people to ever walk the grounds of Africa.

Character-wise, Mahatma Gandhi and the monster Adolf Hitler had a lot in common than often portrayed. The only difference I see between the two is that, one relied mostly on the power of guns, cannons, bombs, etc. while the other relied on the power of words and “salt”.

India remains one of Africa’s closest partners and several Indians have helped and continue to help Africa. Even during Africa’s long struggle for independence, India and several Indians were there to help. Some of Nelson Mandela’s closest friends were Indians and some went to jail with him as political prisoners. I am not in any way referring to India or Indians in general. I am just referring to one man and one man only; Mahatma Gandhi. India’s Mahatma Gandhi wasn’t just racist. He was rather extremely racist especially towards black Africans.

Gandhi was and is a great man to most Indians. Why? Because Gandhi fought and gained independence for India and remains the “father figure” of modern-day India. In other words, I understand why some Indians would go to any length to defend the “father” of their nation. Fighting for independence is never an easy task. Yes, that was a great achievement and I respect Gandhi for that. However, was that enough reason to put Gandhi in the “peace icon” category? Well, most peace-loving people in Africa and around the world will answer "NO". To most peace-loving people around the world, putting Mahatma Gandhi in the “peace icon” category is a major slap in the faces of all those great men and women who stood firm and fought against racism, inequality and oppression in all forms of life and not just for one’s own race and ethnicity.

Mahatma Gandhi was all about “caste” systems and he made this known throughout his writings, speeches, and deeds during his long years in Africa, especially in apartheid South Africa, where he worked several years as an attorney before returning to India in 1915 to fight for Independence.

Gandhi was a very learned man and there is no doubt about that. Being a colored man with those qualifications in that oppressive system, many colored people, especially black Africans, looked up to him. Unfortunately for those poor black South Africans, the great Gandhi turned a blind eye. Why? Because he (Gandhi) “do not associate himself with Kaffirs”. Instead of standing up for truth and justice for the oppressed people, the great Gandhi became a racist tool working for the oppressive apartheid system in South Africa..

In Gandhi’s racist mind, Indians are “infinitely” superior to Kaffirs and this was what he had to say on May 27, 1899: “Your Petitioner has seen the location intended to be used by the Indians. It would place them, who are undoubtedly infinitely superior to the Kaffirs, in close proximity to the latter.”

This was what India’s Mahatma Gandhi had to say on September 26, 1896 about the oppressed black African people: "Ours is one continued struggle sought to be inflicted upon us by the Europeans, who desire to degrade us to the level of the raw Kaffir, whose occupation is hunting and whose sole ambition is to collect a certain number of cattle to buy a wife, and then pass his life in indolence and nakedness."

In Gandhi’s racist view, "Kaffirs" are less advanced and this was what he had to say on Sept. 9, 1906: “Even the half-castes and Kaffirs, who are less advanced than we, have resisted the Government. The pass law applies to them as well, but they do not take out passes.”

In Gandhi’s racist view, Kaffirs are uncivilized animals and this was what he had to say on July 3, 1907: “Kaffirs are as a rule uncivilized – the convicts even more so. They are troublesome, very dirty and live almost like animals…”

As I mentioned above, both Mahatma Gandhi and Adolf Hitler had a lot in common character-wise. Although their approaches were quite different, they shared some core inner values. For example, both Adolf Hitler and Gandhi believed in the “purity of race” and preached against inter-racial relationships. In South Africa, as I mentioned above, Gandhi considered the white race the "master race", and went to the extent of supporting apartheid even at the time of war (on native [black African] tribes). For example, during the "Kaffir Wars" in South Africa, Gandhi was a regular “Gunga Din”, who volunteered to organize a brigade of Indians to put down the Zulu uprising.

This was what Gandhi had to say in “The Indian Opinion” of September 24, 1903: "We believe as much in the purity of races as we think they (the Whites) do... by advocating the purity of all races."

This was what Gandhi had to say on June 2, 1906 in “The Indian Opinion”: "Thanks to the Court's decision, only clean Indians (meaning upper caste Hindu Indians) or colored people other than Kaffirs (referring to black Africans), can now travel in the trains."

Gandhi, the peace icon, saw the Kaffirs (black Africans) as dangerous wild animals and preached to his fellow Indians to stay away from black Africans, especially the black African women, and this was what he had to say on Dec. 2, 1910: “Some Indians do have contacts with Kaffir women. I think such contacts are fraught with grave danger. Indians would do well to avoid them altogether.”

I can go on and on but the post is getting too long so I will end here. Please note that, all these are direct quotes from “The Collected works of Mahatma Gandhi” which includes his writings and statements during the years he spent working as an attorney in South Africa.

So as you can see, the great Mahatma Gandhi was no peace icon as some people portray him to be. He was a very racist and angry man who saw nothing good about the black African race, and would rather do away with the entire black African race. Character-wise, Gandhi had a lot in common with the monster Adolf Hitler than often portrayed. In other words, it is a great shame on all of humanity to refer to India’s Mahatma Gandhi as a “peace icon”.

#1 Dinesh Rathod
Would it be wrong to presume this was written by an African individual....I apologise if that is offending, but I would have believed this more if it came from a third or fourth party...... I am no fan of M.K.Gandhi, but this feels overly exaggerated...... If he was racist then how did he survive all that time Africa?.....How did the good people of the African nation didn't abolish him?....How did they let him stand and fight for them as an Attorney?.....Sorry but it just doesn't add up.....
Quote

#2 K. Ananse
@Dinesh Rathod... To begin with, Africa is not a nation. In fact, Africa is a continent of about 55 independent nations and South Africa happens to be one of those independent 55 nations. Gandhi was in South Africa and DID NOT fight for Africa or any African for that matter. Gandhi received his training and practiced law in South Africa. However, Gandhi was so racist to the point where he did not want to have anything to do with the "Kaffirs" and in fact, advised fellow Indians not to have dealings with "Kaffirs" or black Africans. To Gandhi, it was a taboo for an Indian to descend so low to the level of a black African. In other words, almost all of his clients were Indian immigrants living in South Africa at that time and some Whites. We are talking about Apartheid South Africa where White people were the first class citizens, Indians were the second class citizens, and black Africans, 10th class citizens. Gandhi came to accept Whites as the superior race with Indians in close distance. Maybe Mahatma Gandhi did really change in his later years. However, during his time in South Africa, he was nothing but a racist pig and Yes, this is coming from an African.
Quote

#3 John D. Coleman aka Ganapati
I stumbled across this article and am mortified by the narrow, parochial, myopic, and incomplete view it presents. Mahatma Gandhi, much like Malcolm X, was a life-long work-in-progress. That is to say, that he was one of those individuals who was constantly redefining who he was, revising his world-view, and growing and developing as an individual. The views held by Gandhi at the end of his life, were quite different than those he entertained at the start of his career. There's a talk I give on Pathways to Peace and Empowerment that examines the roots of the Civil Rights movement and ties it quite directly to the philosophy espoused by Mahatma Gandhi. Many African American leaders took "pilgrimages" to India to study his philosophy; either with him directly (when he was alive), or with his disciples after his death. Such notables such as Dr. Rev. Martin L. King, Bayard Rustin, Rev. James Lawson, Rev. Howard Thurman, Dr. Benjamin Mays, and Dr. Mordecai Johnson are just a few of the African American luminaries who traveled to India in order to benefit from the wisdom of Gandhi. These were men of great erudition and perspicuity, and knew the history of the man. They would have in no way embraced Gandhi if they believed him to be the racist that you describe. The life of Gandhi, much like the life of Malcolm X, follows an arc. It is a journey that leads from falsehoods to truths, from shadow to light. It is the journey that each of us must take as we seek to grow in knowledge and wisdom. By the end of his life Gandhi repudiated the caste system, had a nearly exalted view of women, and thought American Blacks would likely do a better job practicing his philosophy of Ahimsa and Satyagraha than even he and India had done. Just to be clear, it is not my intent to place Gandhi on a pedestal and suggest any degree of perfection or sainthood on his part. But I believe we do him, and future generations that can learn from his example, a grave injustice if we do not properly characterize who and what he was. He was a man who discovered a Truth greater than himself, and struggled throughout his life to live up to it. Though flawed even to the end, it is to his credit that he died a better man than he was when he began.
Quote
Refresh comments list
Add comment