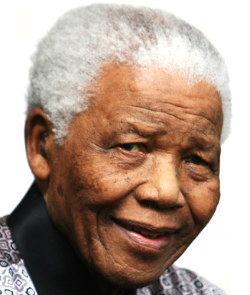 Those who know cannot shy away from the truth. Those who do not know can only judge this good man based on what they do not know. No he is not gone. He is "still there". It is true Mandela is not going to live forever but the good news is that, Mandela is going to be with us forever. In Africa, good people just go to sleep. Good people never die and Mandela without a doubt was and still is a very good man and I strongly believe Mandela will be with us forever. He may go to sleep but he will wake up again when the time is right.

It is not just black people who love this man. Some White people (especially white South Africans) who know the truth, love this man more than even black people including black South Africans.Mandela did not fight for just black people and Mandela did not fight for just white people. Mandela fought injustice even in the face of death. Mandela fought oppression and discrimination even at the point of death. Yes that is why those who know the truth cannot shy away. I have been reading some articles online recently about Mandela and it is not quite surprising to me at all to read some white people around the world hate Mandela so much with passion. They claim they know so much about his man but the sad truth is that, they do not know. Some even claim Mandela was a terrorist and deserve nothing but death why because Mandela started his journey quite aggressively.

Mandela is almost 95 years old so it is not quite surprising to see him in a hospital. We are just mortal beings and none of us have the right to escape the laws of nature. We will all be there (where Mandela is right now) someday and that is why it makes sense as a human being to feel the pains of a fellow human being who is already there. It is quite sad to read some of the garbage that comes out of the minds of people especially in the media (take CNN for example). Some talk as if they own life which is quite sad.

Nelson Mandela is not gone yet but what if the great Madiba goes to sleep tonight and forgets to wake up on time? Can the racist South Africa survive without this man of peace? Can South Africa progress without his inspiration? Can this cruel and racist world remain any good without all the good inspiration we get from this extraordinary human being? What would be our fate once the great Madiba has gone? These are some of the questions we need to answer now that he is still alive. I always pray God continues to keep Mandela alive for us because this crazy world needs his inspiration. I pray God gives him good health and long live so we all can continue to benefit from this good man.