Investors in Africa: The destructive storm 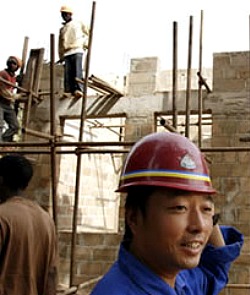 I can feel their pain because they are human beings just like we here in Africa and I believe they feel pains the same way we do feel pains over here in Africa. When I first saw the massive destruction the storm caused in the world's most famous city, the question I asked myself was, should such a merciless storm strike my poor country here in Africa, how many people would survive?

I know some of you are already predicting the untold number of deaths in your heads which is very normal considering what happened in poor Haiti not long ago. However, another question crossed my mind. If a storm which doesn't know what it is doing could cause such a massive destruction, what about someone who knows what he or she is doing? Think about a person or a group of people who know exactly what they are doing? If a storm which is non-thinking and has no mind of its own could cause such a massive destruction within such a short period of time then what about a person or group of thinking beings

New Yorkers prepared very well ahead of time. Just imagine a situation whereby New Yorkers knew nothing about the coming of the storm. Imagine the level of destruction the super-storm Sandy could cause. Imagine another situation whereby Sandy the super-storm knew ahead of time the fact that New Yorkers were busy preparing to meet her. Imagine the situation whereby Sandy the super-storm also knew and prepared ahead of time changing her destructive paths and tactics so as to unleash even more harm. Imagine the level of destruction Sandy could cause within that same short period of time. That is exactly how some thinking beings continue to destroy our beloved continent. One of such destructive storms we face here almost every single day is made up of a group of thinking beings who call themselves Investors. They come as investors but end up sucking the cold innocent blood of tiny little babies.

Africa needs investors and by investors I mean good investors who think not just about the huge profits to carry back home but also do think about the poor but hardworking people in Africa who continue to toil all day and night for these such investors. They come in their numbers to Africa preaching nothing but the desire to better the lives of the poor in Africa. The sad truth however is that, almost all of these so-called investors are nothing but blood-sucking beasts in suits and well designed-ties who continue to tear through the tiny veins of the poor but hardworking Africans all day and night. They get raw materials almost free of charge. They build blood-sucking factories and employ some very hardworking but poor Africans to work in such factories so that they (the so-called investors) can make money and even more money.

The sad truth however is that, most of these hardworking Africans working for such investors in Africa cannot even afford to feed themselves and their families why because these so-called investors take advantage of our bad situation here in Africa to the point where they refuse to pay even the workers (the poor Africans) who toil for them all day and night. Those who pay also do pay these workers nothing but peanuts sometimes with no salt at all. They take billions of dollars back home in profits but refuse to pay us good so we can take care of our poor families back here in Africa.