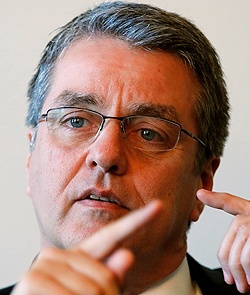 The Salvation Army and some few other “Good will” stores are perhaps the only places one can get second-hand or used clothes to buy in America and the good news (for the economy) is that, those second-hand clothes are not imported. However, this is not the case in Africa. In fact, over 60 percent of Africa’s clothing is second-hand imported. Because the second-hand imported clothes are generally cheaper and more abundantly available than local fabrics, people tend to buy more second-hand clothes. This creates unnecessarily tough competition for local textile industries. Second-hand clothing easily wins this fight as far as prices and easy availability are concerned and many local textile industries sadly disappear.  This was the main reason why East African countries (Kenya, Burundi, Tanzania, Uganda, Rwanda and South Sudan) recently announced a ban on the import of second-hand clothes. Sadly however, Trump threatened to retaliate and almost all of them backtracked.

Somewhere in 2016, member states of the East African Community (EAC) came up with a plan to ban second-hand clothes and shoes by 2019. The EAC doubled a common external tariff rate for worn clothing to $0.40 (€0.34) per kilogram. Rwanda increased its per-kilogram import tax to $2.50.

As I mentioned earlier on, the main purpose here was to help the local textile industries in East Africa develop and thrive. Sadly, this angered US president Donald Trump who threatened to retaliate. According to Trump, the tax goes against the African Growth and Opportunity Act (AGOA). Ironically, the main purpose of AGOA (a piece of legislation that was approved by the U.S. Congress in May 2000) was to “help poor countries evolve”. The American trade organization SMART — the Secondary Materials and Recycled Textiles Association — complained to the US Trade Representative's office, claiming the import ban harmed US industry. SMART claimed that at least 40,000 US-based jobs were at risk. And because of that, Trump threatened to retaliate. In the end, the US kept the “40,000 US-based” jobs while local African textiles industries suffered and continue to suffer.

There is a similar situation in the food and agricultural sector. Because the import of food is on the rise in Africa, competition is getting tighter and many local farmers stand no chance at all. Let’s take a small West African nation of Benin (with a population of about 11 million people) for example. In 2016, Benin exported $1.11B and imported $4.75B, resulting in a negative trade balance of $3.65B. A very significant portion of the imported goods was food and agricultural products. As we all know, Thailand is the second largest rice exporter (with about $5.2 billion in exports last year) in the world. It may surprise you to know that the small West African country of Benin is the biggest importer of rice from Thailand. Because of this, rice farmers in Benin stand no chance at all and many who would have loved to go into rice farming have given up the idea.

Also, in Benin, chicken is the main source of protein for many people. The sad thing however is that, poultry farming is dead in Benin. Why? Well, it is because Benin imports more than 90% of its chicken from countries like France. Someone may ask, why can’t the Beninese government place a ban on some of these imports to help local farmers? Well, the answer is similar to above. America, France (and other EU member countries), China, Thailand, etc. with “trade deals”, will retaliate. At the end of the day, the super powers in trade prosper while poor third world countries (like Benin) wallow in poverty.