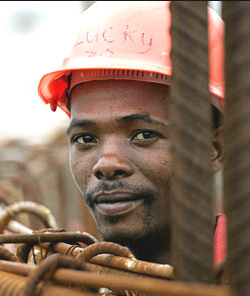 We are living in a machine world and machines have taken over the workforce. Machines get the work done faster and in most cases, cheaper and better than the "human" workforce and that explains why so many companies today are cutting their workforce and adding more and more machines. Machines are great and there is no doubt about it. However, there is no better machine than the human brain. In other words, there are some certain errors only humans and not machines can fix.

We are living in a world of technology. However, the world is just advancing in technology. What this means is that, there are certain machines and technologies not yet available. Which also implies, there are certain jobs only humans can do at this point in time. So the human workforce is needed but unlike machines which only need "fixes" from time to time, humans must be paid for their services -- which can be quite "expensive" for most companies in advanced countries (considering minimum wages and other worker rights and privileges). Because of this, manufacturing companies in advanced countries have resulted to outsourcing.

Outsourcing in this case is another business strategy adopted by some western companies to enable them escape those "high costs" of employee wages. In other words, these companies have managed to come up with ways and means of getting human beings to do the jobs machines cannot do but at very cheap prices --- infact, cheaper in most cases than even the costs of repairing those manufacturing machines. In short, advanced countries are turning the poor third world workforce into "advanced" machines working all day and nights just for "grease" to grease their joints and nothing more.

These outsourcing western companies don't care about our working conditions and don't care about our welfare. They only care about getting the work done on time so they can reap their huge profits. Just a few days ago, about 1200 people died in Bangladesh with several others severely injured and some still missing when a manufacturing building collapsed on top of some poor workers who worked under barbaric conditions inside that horrific building (outsourcing center). The world got to know our story but unfortunately, it was too late for those our poor Bangladeshi brothers and sisters who lost their lives. May the good Lord grant them eternal rest.

It is not just Bangladesh. This happens all the time in other third world countries. Just that, the world doesn't always get to know. Worse things are happening right now in some places in India, in the Philippines, in several poor countries in Africa and other parts of the third world. Children some as young as 9 are being outsourced by these western companies. Some of these poor children work in factories all day and night and the most painful part is that, most of these children don't even get paid on regular basis. Some have to wait months to get paid (in peanuts) for the work they do. This is how some greedy western companies continue to outsource poor people in third world countries.